Skip to content
Go Home «» News «» Breaking News «» “Sex and the City”: Are Aidan Shaw and Carrie Bradshaw back together? 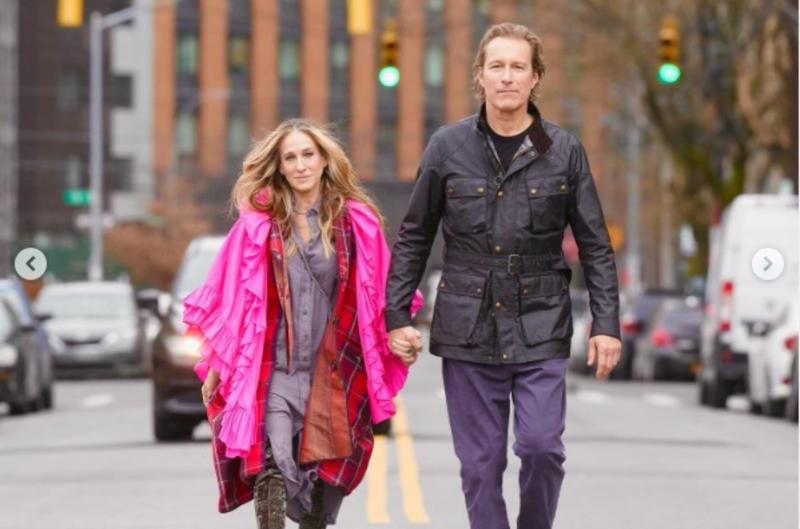 And Just Like That or Sex and the City fans are ecstatic. And with good cause…

Carrie Bradshaw and Aidan Shaw are likely the most iconic ex-couple in history. And a reunion is a distinct possibility.

In recently published behind-the-scenes images, Carrie Bradshaw and Aidan Shaw can be seen walking hand in hand, to the delight of their admirers.

Fans are aware that, in addition to her love of shoes and legendary fashion, Carrie Bradshaw has a penchant to renew old relationships.

At the end of the first season, Carrie was still grieving the untimely death of her husband, and many thought that Aidan’s return, portrayed by John Corbett, could lead to a romantic relationship.

According to Vogue, the actor’s return to the successful franchise was confirmed in August.

Bradshaw, portrayed by Sarah Jessica Parker, is seen wearing velvet boots with a clashing pattern outfit. She completes the ensemble with a ruffled hot pink scarf.

City and Sexuality Carrie Bradshaw, Aidan Shaw, reunion, season two of Just Like That
The couple’s style is impeccable. Even Aidan’s. Instagram: @justlikethatmax; @craigblairnhorn; @justlikethatmax
But it’s Aidan Shaw’s handsome appearance that has many speculating. The furniture maker wears a belted, gold-buttoned coat with enormous cargo pockets. Fans speculate that he’s succumbed to Bradshaw’s enchantment because he wears it with purple pants.

The handsome ex-boyfriend of Carrie Bradshaw has been intermittently present in her life, even making a brief appearance in Sex and the City 2.

»“Sex and the City”: Are Aidan Shaw and Carrie Bradshaw back together?«