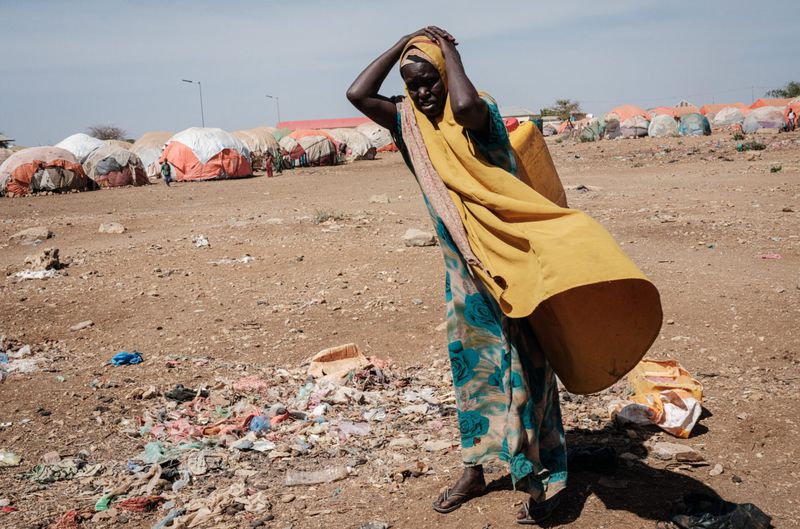 Four of these are responsible for more than seven million internally displaced persons. At the top of the list, the DRC is home to almost 5.5 million people.

The primary cause of these large numbers is national and international strife. The region has been plagued by conflicts for decades.

The protracted armed conflicts and rebellions in the Democratic Republic of the Congo and the Central African Republic, for instance, have contributed to the instability of the region, with grave consequences for its neighbors, some of whom have been directly involved in the hostilities.

As the election nears, Nigerians rush to obtain their voter identification cards.

Moreover, the Islamist insurgent group Boko Haram has emerged as a major menace in Central Africa. In addition, Burundi is plagued by ongoing political turmoil and bloodshed.

The challenge of internal displacement is exacerbated by natural calamities such as flooding.

People who are displaced are a highly vulnerable group. They are forced to reside in overcrowded and filthy camps. In addition to fleeing danger, they are surrounded by active combat scenarios. For instance, in Plaine Savo camp (DRC) in February 2022, a militia group murdered almost sixty residents.

Globally, the administration of internally displaced individuals can be difficult. It necessitates both resources (such as food and tents) and political will.

As a professor with expertise in the legal promotion and protection of the rights of the people “on the move” in Africa, I propose that adopting a unique regional protocol could ease the management of displaced persons in the region. A protocol is an international legal instrument that creates legally binding commitments.

In this instance, the protocol would, among other things, legally obligate countries to obey not only its additional provisions but also those of the Kampala Convention. The African Union (AU) adopted this convention in 2009 to safeguard and help internally displaced people on the African continent.

The protocol’s enforcement mechanism should complement and aid in the execution of the Kampala Convention’s provisions.

The Kampala Convention offers solutions for the return, relocation, and resettlement of internally displaced individuals. It also allows displaced individuals to seek compensation for housing, land, and property losses. Also covered are physical, mental, and other sorts of injury.

But it’s not obvious whether these services are accessible in practice. The issue with the Kampala Convention is that it applies to the entire continent and lacks clear enforcement mechanisms.

The region of Central Africa has a significant problem with displaced persons. Currently, the UN organization for refugees, UNHCR, is the primary aid provider in the region. And by late October 2022, the regional budget for 2023 already appeared inadequate, repeating a pattern from the previous three years.

A sub-regional treaty or protocol might concentrate on this particular circumstance and produce a more effective management strategy. Nowhere in Africa has a subregional regime for internally displaced people. Countries are preoccupied with other issues or view the predicament of displaced people as a domestic matter.

My suggestion is an attempt to change this in a real way.

The Kampala agreement, for instance, stipulates that while though governments hold the primary duty and obligation for providing help and protection to internally displaced individuals within their territory, they must collaborate with one another in this regard. The proposed agency should ensure that states in the subregion share the financial and material costs of addressing situations of displacement.

The Economic Community of Central African States (ECCAS), comprised of eleven countries, must exert great effort and have strong political will to draft such a pact.

The regional community should take the initiative on the protocol. It is easier for 11 regional parties to establish an agreement than for 55 AU members to participate in negotiations. At the continental level, for instance, negotiations on free movement of persons that began in 1991 are still ongoing. Only four nations have approved the Free Movement Treaty of 2018. In the Economic Community of West African States (ECOWAS) region, however, a Protocol on Free Movement has existed since 1979 and has been largely implemented.

After approval by a number of ECCAS members, the protocol might enter into force, and a “committee” of politicians and magistrates could be formed to execute its terms.

This group would have primary responsibility for the protocol’s enforcement.

The actions of the protocol shall be funded by the ECCAS Commission, which is funded by its member nations. Member nations must translate discussions of regional unity into concrete duties. These include financial obligations and aid. The creation of a specific fund to aid internally displaced individuals is possible.

This is not an implausible suggestion. Recently, solidarity and responsibility sharing have topped political agendas, particularly in the wake of crises sparked by political conflict in numerous ECCAS nations. The DRC, for instance, joined the Kampala Convention on 3 February 2022, the day after the Plaine Savo massacre.