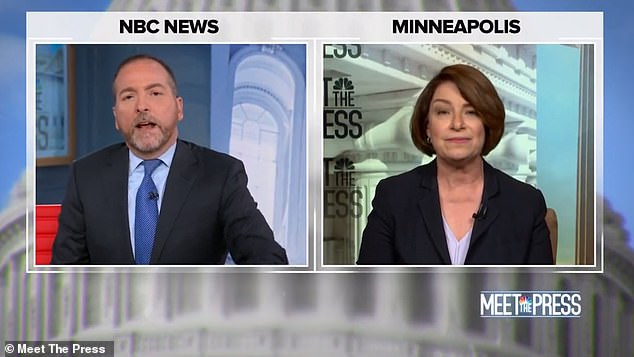 The Minnesota politician also suggested that his relatively lenient views on content regulation could lead to additional events similar to the break-in at the San Francisco home of House Speaker Nancy Pelosi.

A man with QAnon beliefs, anti-Semitism, and other extremist ideas stormed into Pelosi’s home overnight on Friday and attacked her husband, Paul Pelosi, when he attempted to confront the intruder.

Klobuchar alleged that social media corporations profited “from this brutality”

In response to the Pelosi attack, the moderate Democrat stated on NBC News’ Meet The Press on Sunday that she will introduce a ‘bipartisan amendment’ to the annual defense budget bill to remove lawmakers’ private information from the internet.

On Friday, social media observers were on high alert. Musk finalized his $44 billion acquisition of Twitter and terminated three of its top executives.

When asked if she has faith in Musk’s ownership, Klobuchar replied, “No, I do not.”

Earlier in the interview, she attributed the break-in to the internet’s amplification of threats against Pelosi.

Klobuchar stated, “A terrible onslaught in which she has been demonized for years has gone viral, and it has turned violent.”

Later, when outlining her concerns about Musk controlling Twitter, she cited David DePape’s disturbing and radical online presence before to his attack on Pelosi’s family.

Klobuchar stated, ‘I think you need to have content filtering, because when you look at what this person was looking at, he was looking at horrifying stuff you don’t even want to discuss on your show.’

He posted anti-Semitic stereotypes. He displayed violent memes and all of this election-denial, pro-Trump, MAGA mob talk. This is precisely the issue at hand.

She noted that Musk’s intention to introduce a content moderation board ‘was a positive indication,’ but she remained ‘concerned.’

When asked what could be done immediately to better safeguard senators, Klobuchar stated that when lawmakers return to session, ‘different degrees of protection’ including more law enforcement resources should be on the table.

She also proposed laws to increase the privacy of elected officials.

Klobuchar stated, “I have a bipartisan proposal that will allow members to remove their private information from the internet.”

‘A similar clause has been proposed for judges, and it is included in the National Defense Reauthorization Act. Therefore, I am optimistic that I will eventually be able to obtain the necessary support to complete this task. And again, it’s nonpartisan.’