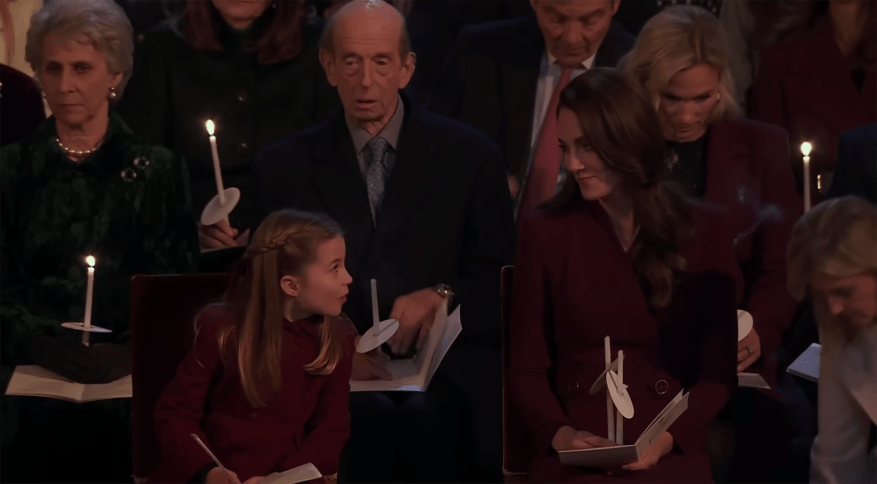 Princess Charlotte’s face lighted up at a carol service when a favourite children’s book character was mentioned.

At the “Together at Christmas” concert, “Paddington” actor Hugh Bonneville read a passage from “Paddington’s Christmas Post.” The 7-year-old prince was ecstatic.

Charlotte joyfully joined her older brother, 9-year-old Prince George, in singing hymns such as “Away in a Manger” at the ceremony held earlier this month but broadcast on Christmas Eve.

Their mother, Kate Middleton, organized the concert at Westminster Abbey and dedicated it to Queen Elizabeth II, who passed away in September at the age of 96.

Middleton stated that the purpose of the event was to “maintain Her Majesty’s tradition of honoring people who have gone above and beyond to assist others.” Her Majesty leaves behind an extraordinary legacy that has profoundly influenced many of us.”

She continued, “This year’s carol service is dedicated to her and all those who are no longer with us.”

Mel C of the Spice Girls, Kristin Scott Thomas, and pianist Alexis Ffrench were among the other performers.

During the June Platinum Jubilee celebrations, the Queen notably ‘played’ alongside the young royal in a skit that kicked off the star-studded “Platinum Party at the Palace” tribute concert in front of Buckingham Palace.

In it, the king had afternoon tea with the Peruvian bear, who drank tea directly from the spout and caused mayhem by splattering cream on a poker-faced Palace footman.

As a homage to the Queen after her passing, hundreds of Paddington Bears were left outside Buckingham Palace.

It was the first time Louis participated in the annual royal custom of stepping up to the church and greeting well-wishers outside.