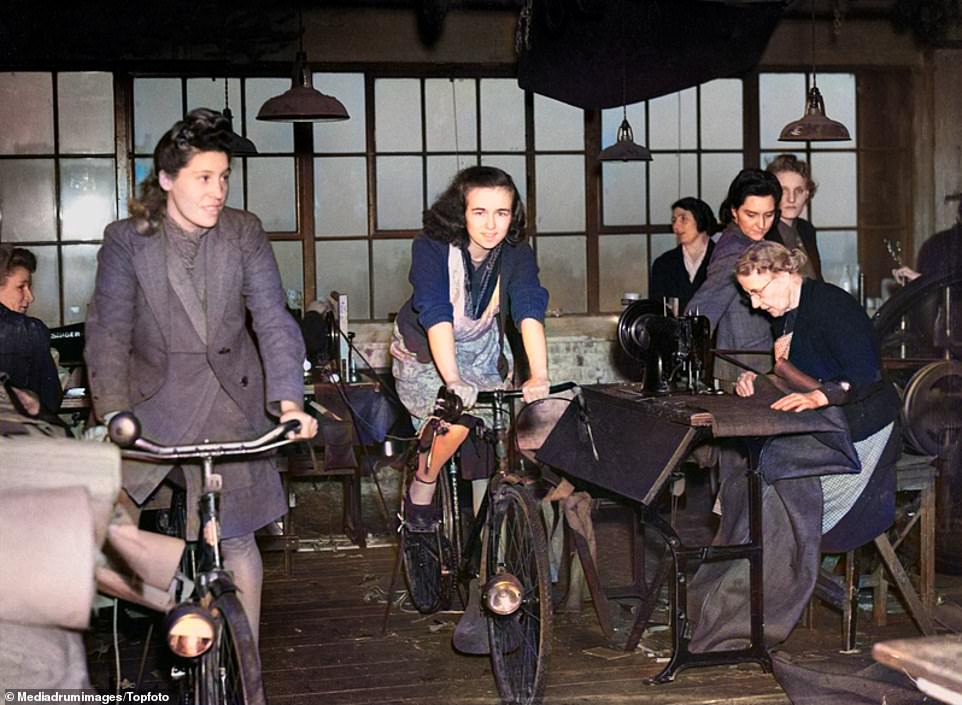 The lights went off during the winter.

Two years after the end of the Second World War, Britain was still experiencing suffering. Now, fresh colored images revive the severity of the problem.

The images, which come from the Top Foto collection, include bank employees working by candlelight, lengthy lines for coal that was urgently required to heat houses, and even bicycles being used to power machinery at a tent and tarpaulin plant in London’s East End.

The situation forced Clement Attlee’s administration to enact severe power restrictions, which left industry in London, the Midlands, and the North-West completely without energy and required residents of those areas to turn out their lights for five hours each day.

In an effort to preserve power, the BBC was even compelled to temporarily suspend both its television program and the Third Programme, the forerunner of Radio 3.

The photographs come as Britain continues to struggle with an energy crisis brought on by the conflict in Ukraine and the associated skyrocketing gas costs. There have been fears that there may be power outages this winter.

The hardest winter in recent memory contributed to the gasoline scarcity.

Even a reporter from The Daily Mail flew in to provide much-needed food, drink, and current news to a Derbyshire community that had been shut off by relentless snowfall.

Biggin’s 400 residents had gone many weeks without speaking to anybody from the outside world. According to reporter Murray Edwards, “the villages were down to their last few loaves of food when the skis of our aircraft touched down on Tom Wibberley’s football field, 200 yards from the closest dwellings.”

The one and only general shop was empty on every shelf. The last bit of coal was only dust. For over a week, radio, electricity, gas, and water had been shut off.

American author Christopher Isherwood, who was in town, gave a description of the events in London.

Londoners, according to him, “didn’t look despondent or morose,” but their faces still had the lines and fatigue of battle.

Although his main critique was that “maybe the English had gotten a touch too meek in their attitude toward state control,” many others “stared wistfully” at the writer’s new coat.

Isherwood also thought that London’s deteriorating physical condition was “powerfully and continually dismal,” with the snow taking on the appearance of an invading foe.

The media used almost militaristic terms to describe it: “Scotland Isolated,” “England Cut in Half.” Everyone in England was trembling, he said.

I recall how the crowd gathered around, muffled to the chins in overcoats, sweaters, and scarves, while the performers bravely performed to almost empty homes while dressed only in indoor attire.

Some of my pals told me, “Believe us, this is worse than the war,” two or three of them.

The scenario, they said, “couldn’t by any stretch of the imagination be interpreted as a challenge to self-sacrifice or an inspiration to patriotism; it was plain hell,” which is what I took them to mean.

Birmingham had ongoing gasoline shortages as a result of the snow. David Kynaston, a historian who writes for the Daily Mail, described a city-dwelling retired teacher’s journal entry.

According to Mary King, the Longbridge Austin Motor Works will have 17,000 idle workers tonight due to a shortage of gasoline. This situation affects a lot of other businesses. It is a horrible thing to have to confront.

Two days later, her worry became even stronger: “One thinks of the shortage of fuel, and household comforts, such blankets and sheets, the scarcity of food, and the unemployment of thousands of people in industries owing to lack of coal supplies.” I have never experienced such a historical era in my lifetime.

Early in February, when Baron Shinwell, the Minister for Fuel and Power, declared that energy deliveries to industry in London, the Midlands, and the North-West would be halted, the problem worsened.

Five hours a day would be spent without power for the local residents.

The decision was taken as a result of the weather making it hard for coal to reach the crucial regions of the nation.

Ms. King’s response was a perfect example of how “someone, somewhere, sometime has been short-sighted.”

Clement Atlee’s administration was dubbed the “silliest collection of sneering gas-bags we’ve ever been saddled with in this country” by patternmaker Colin Ferguson of Glasgow.

The next 12 days saw the crisis reach its height as the weather continued to be terrible and the jobless rate increased to 1.75 million.

This number stood in sharp contrast to the 400,000 people who were jobless by mid-January.

Writing in the student newspaper from Oxford, then-undergraduate and acclaimed novelist Kingsley Amis described the weather to his friend, poet Philip Larkin, as being “BLEEDING COLD.”

The extent of the forced poverty is shown by other journal entries. “February,” wrote Rose Uttin. By 2pm, I am so exhausted and unable to find any soap that I want to just give up.

I am conserving the 2 pound. potatoes Lily provided me for Sunday’s meal.

A coal miner in South London’s Croydon explained how “the ones with all the money get whatever they want.”

I delivered half a ton to a home in Purley this morning; it was a good amount, but they already had a supply of around a ton and a half, in addition to a few tons of coke. You can’t obtain any coke right now, but those guys can because they have the money, he said.

Growing up in Penge, South London, one of the brothers of future Rolling Stone Bill Wyman later recalled how his bricklayer father lost his job and had no income.

There wasn’t enough food for everyone, so he would strike a few of us and tell us to go to bed without supper while yelling, “Get to bed, don’t fight!”

Then you would be pummeled and kicked up the stairs, and that was the end of it. You didn’t want to go to bed at the home where we lived, either. Ice covered the inside of the windows, and it was very cold.

The dreadful cold persisted until far into March, when business had its power restored and almost everyone who had been made temporarily jobless returned to work.

However, the limitations on home power usage persisted till the end of April. But Kynaston pointed out that beginning in late February, there was unmistakable evidence of an increase in instances of concealed consumption.

Later in March, temperatures started to rise, but when the snow and ice melted, massive floods were caused by the thaw.