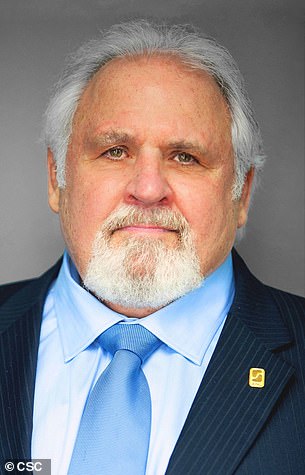 A comedian at the Netflix event where Dave Chappelle was stormed on stage by a man wielding a bayonet claimed the company handling security for the show ‘shrugged off’ his warning that the attacker had jumped over a barrier to get into the festival.

The security company, Contemporary Services Corporation (CSC), was also in charge of last November’s Astroworld Festival where 10 were trampled to death and was responsible for security at the 2017 Las Vegas country music festival where 59 people were gunned down. The event remains the deadliest mass shooting in American history.

CSC has come under fire for its lax security at last Tuesday’s Netflix Is a Joke festival in Los Angeles after Isaiah Lee jumped over a second barrier and tackled Chappelle while he was performing at the Hollywood Bowl.

Moments before, comic Tehran Von Ghasri said a female CSC guard ignored his warning about a hooded man jumping over a barrier with his backpack on.

‘She shrugged me off,’ Ghasri said. ‘And within a minute, [Lee] had hoisted himself onstage and knocked Chappelle down.’

A security guard working the event claimed there was no ‘real hiring process’ for the show.

‘I feel anyone could have brought anything in,’ the unidentified worker told BuzzFeed News.

The firm – one of the largest event security companies in North America –  routinely hires inexperienced staff, the staffer said, and held a single security briefing just two days before the Netflix event.

He said company leaders urged staff to keep the crowd moving to avoid a logjam.

CSC – which has 50 locations across the US and Canada and about 60,000 workers, according to the company’s LinkedIn – has been sued dozens of times by staff and concertgoers claiming negligence, battery, assault, and labor violations over the past 30 years.

CSC was founded by Damon Zumwalt and is based in Northridge, California

The firm based in Northridge, California, was founded by Damon Zumwalt, who started the company after his first year of college in 1967.

The anonymous staffer said he learned about the job at the Netflix event through a friend who said CSC was looking to hire quickly. He said some of the other contractors hired with him had never worked security and had no experience with a metal detector or with checking bags.

At a security briefing two days before, senior CSC staffers gave out a blue-and-yellow company T-shirt.

The day of the event, leaders held a meeting for their sections and warned staff that there would be a big crowd and that they should try to get people in as quickly as possible to avoid a logjam before the show started at 7pm.

‘The crowd started getting bigger, and I was thinking the whole time there is no way people were being thoroughly checked at the rate people were walking in,’ the anonymous employee told BuzzFeed News.

It remains unclear how Lee, 23, snuck the weapon into the Netflix is a Joke comedy event last Tuesday, but unnamed police sources told TMZ there was only one entrance area, where the metal detector could be circumvented.

He later allegedly used the weapon as he lunged at Chappelle, who was finishing up his comedy routine at the festival.

Chappelle was uninjured in the attack, as Lee was tackled by security guards who appeared to break his arm as he fought back.

Lee – an aspiring hip-hop artist who has posted rap videos on YouTube going back to 2020 – is now being held in LA County Sheriff’s custody on a single felony charge of assault with a deadly weapon.

Lee’s motive for the attack remains unclear, though his brother told Rolling Stone that he has mental health problems and has some connection to the trans community – which Chappelle has been accused of disparaging – but it’s not clear what that is.

Chappelle, meanwhile, continued with his set as he joked that his attacker was a ‘trans man.’

Lee was charged with four misdemeanors. He pleaded not guilty at his arraignment on Friday and faces 18 months in jail if convicted.

The City Attorney, who filed the case, is doing his job but DA Gascón should also do his job and charge this as a felony. This was a violent assault that was perpetrated on an unsuspecting entertainer while he was giving a show in front of thousands of people at the historic Hollywood Bowl.

‘Entertainers in LA need to know this is a justice system that will protect them. There is no question here that when someone is violently assaulted by another in possession of a deadly weapon that it should be charged as a felony,’ he added.

Chappelle said that he asked police whether he could speak to Lee, who had stormed onto the stage holding a replica gun with a knife attached. Police granted him access to a room where he was being held.

‘I needed to talk to him,’ Chappelle told his audience at LA’s Comedy Store’s secret 70-chair room the Belly Room on Thursday night, according to The Hollywood Reporter.

Chappelle said that the attack was down to Lee’s grandmother from Brooklyn, who was forced out of her neighborhood because of gentrification, and the stunt was meant to draw attention to the issue.

He joked about the situation alongside fellow comedian Chris Rock, who was slapped by Will Smith during the Oscars ceremony, stating: ‘At least you got smacked by someone of repute! I got smacked by a homeless guy with leaves in his hair.’

CSC worker Erick Silva, 21, was killed during a mass shooting at the Route 91 Harvest festival in Las Vegas in 2017

Some of the events that CSC has provided security for, including the Las Vegas and Astroworld festivals, have ended in tragedy.

A 21-year-old CSC employee, Erick Silva, was killed during the mass shooting at the Vegas event, named the Route 91 Harvest festival.

Zumwalt, CSC’s founder, told CNBC there was ‘nothing’ his company could have done as the massacre was carried out from a hotel room across the festival lot.

‘We plan for practically everything, but you don’t plan for something you can’t control, like a guy off-property,’ he said. ‘That’s pretty devastating, and there’s just no real reason for that kind of insanity.’

At the Ultra Music Festival in 2014, a security guard suffered two skull fractures, brain hemorrhaging and a broken leg after she was trampled by gate crashers.

In a $10 million lawsuit, she alleged that the company took down strong fencing at the request of a drink vendor, didn’t hire enough guards and provided little training.

The case was dismissed after CSC argued that she was a contractor, not an employee, and that there wasn’t enough proof of gross negligence.

Last year, an unidentified woman sued CSC after she said she was sexually assaulted by a man who had cut a hole in a portable toilet and reached in to touch her while she was using the bathroom.

The incident happened at the 2019 BottleRock festival in Napa, California, EDM.com reports.

She accused CSC, along with BottleRock organizers and other companies, of being ‘negligent’ and causing her ‘devastating emotional distress as a result of the assault.’

The perpetrator, Peterson William Fontes, is a pastor from Brazil who has a history of the same behavior in Brazil and in the United States, according to EDM.com.

He was eventually convicted and sentenced to 16 years in prison. The lawsuit between the victim and CSC has been settled and is awaiting court approval, BuzzFeed News reports.

CSC has also been named in some of the thousands of lawsuit stemming from the Travis Scott-helmed festival in Houston. The lawsuits have been consolidated into one giant case that is still ongoing.

One ICU nurse at the doomed festival said she fainted in the crowd after she wasn’t able to breathe.

Someone crowd-surfed her unconscious body to a security guard, who put her in a section backstage where medical staff were frantically trying to save people ‘with eyes rolled back into their heads’ and who were ‘bleeding from their nose and mouth.’

She identified herself as a nurse. A security guard then allegedly told her: ‘Please come help us.’