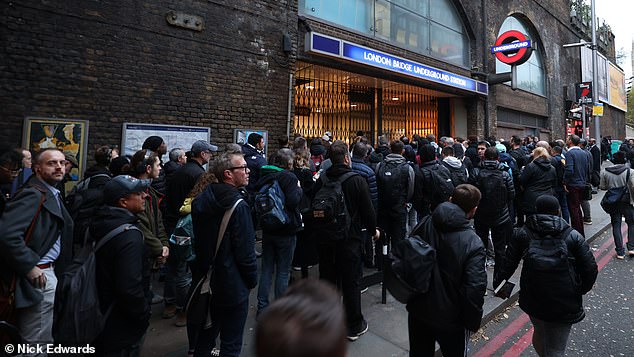 As a result of yesterday’s 24-hour Tube strike, stations are closed and normal service is not expected to return until approximately 8 a.m. this morning.

The public was furious and unable to take their normal route to work on Friday morning after 10,000 workers went on strike on Thursday and brought the city to a standstill.

Some reports indicate that Underground stations remain closed, while TfL urges the public to expect serious disruptions into the early hours of today.

On Friday at 6.30 a.m., eight Underground lines remained entirely closed, while only the Northern Line was partially operational.

TfL is alerting passengers that services will not return to normal until “mid-morning”; however, it is unclear when services will resume.

Commuters have complained about the lack of exact information regarding the severity and duration of disruptions on Friday morning.

A Transport for London social media employee informed an angry customer that Tube services will resume sometime after 8 a.m.

Today, a sign at London Bridge station informs travelers that the station would open “far later than usual.”

This morning, the vast majority of Tube stations remained closed since just one line was partially operational.

Blackhorse Road Station is among those closed on Friday morning as commuters struggle to reach their places of employment.

Currently, the London Overground, Elizabeth Line, and DLR are all providing a reliable service, however the Croydon Tram Link is experiencing slight delays.

One irate commuter tweeted: “Why is the Epping Tube station closed? Numerous commuters were unable to board a train to work.

“Come on, you guys had yesterday off; you should be itching to get to work today.”

This Monday, the RMT announced that TfL had declined its offer to stop strike action. Unite employees are also participating in the walkout.

The issue is about TfL’s plans to reduce station staffing by 10 percent and reassess its employees’ pension plan, after an agreement with the central government for a financing settlement to stabilize its finances during the pandemic.

The RMT stated that it has requested TfL to halt job losses and damaging pension reforms so that both parties could negotiate a settlement.

The 24-hour strike is the latest in a protracted battle with TfL executives who are battling to balance the books in the wake of the outbreak.

This year, unions have caused travel mayhem for millions by holding five additional identical strikes, some of which were timed to coincide with National Rail action designed to paralyze the country.

Currently, millions of people struggle to get to work, whereas those who can work from home do so.

According to TomTom, congestion in London around 8 a.m. on Thursday was about 50 percent higher than at the same time last year, bringing the city to a standstill.

However, the location technology company reported that there was just a minor shift since last week.

As they faced yet another delayed commute to work, today’s travelers were furious with the railroad employees.

In the midst of a cost-of-living crisis, one commuter noted the additional travel expenses caused by the strike, stating that they had to pay multiple bus fares to travel across London.

Someone else stated, “The Tube strike happened yesterday.” This morning, there was no Tube from Highbury and Islington.

“Unacceptable disregard for the public and inconveniencing of the public.” Again.’

This article is being revised.