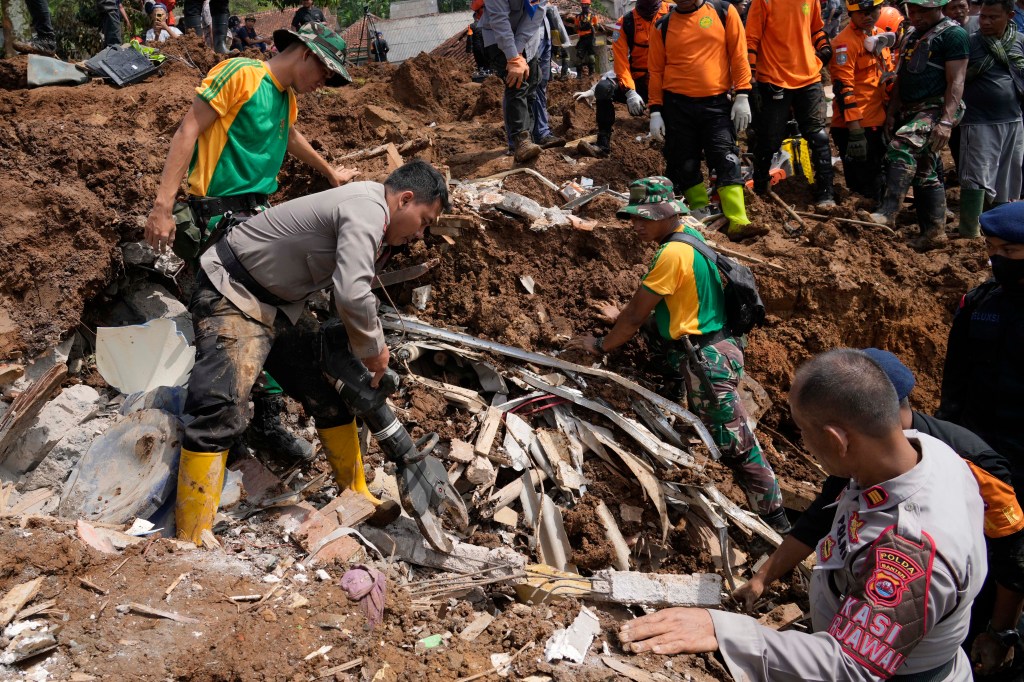 CIANJUR, Indonesia — More rescuers and volunteers were dispatched Wednesday to Java, the main island of Indonesia, to search for the dead and missing following an earthquake that killed at least 268 individuals.

The death toll was sure to grow, as many were still missing, some isolated places were still inaccessible, and more than 1,000 people were injured in the magnitude 5.6 earthquake. On the heavily populated island, hospitals close to the epicenter were already overburdened, and patients on stretchers and beds in tents outside awaited further care.

Chief of the National Disaster Mitigation Agency Suharyanto said that more than 12,000 military personnel were dispatched on Wednesday to bolster the search operations of more than 2,000 police, search and rescue agency, and volunteer personnel.

Suharyanto, who, like many Indonesians, goes by a single name, stated that help was reaching hundreds of homeless people who had evacuated to temporary shelters where supplies could only be given on foot due to the rugged terrain.

On November 23, 2022, rescuers search for victims of a landslide caused by an earthquake in Cianjur, West Java, Indonesia.
AP

Using jackhammers, circular saws, and occasionally their bare hands and farm equipment, police, soldiers, and other rescue personnel dug feverishly in the worst-affected region of Cijendil village, where tons of mud, boulders, and trees remained after a landslide.

As heavy rain delayed their efforts, hundreds of police, military, and locals sifted through the wreckage with their bare hands, shovels, and hoes.

As of Wednesday morning, the government’s priority appeared to be on locating dead and, if possible, survivors. Authorities struggled to transport tractors and other heavy machinery through washed-out roads after an earthquake unleashed landslides that slammed into hillside hamlets.

A school destroyed by the earthquake in Cianjur, West Java, Indonesia is inspected by rescuers.
AP

Nonetheless, many said that the government responded slowly to the earthquake.

Muhammad Tohir, aged 48, was in his family’s living room in Cijendil when the disaster happened. A few kilometers (miles) away from his home, his sister and her two children were buried by a landslide, despite his family’s ability to escape.

“When I arrived at my sister’s house, I was saddened by what I saw,” said Tohir. “Dozens of buildings were buried by landslides… I feel like apocalypse.”

He stated that more than 40 houses in his sister’s neighborhood in Cijendil were buried alive by tons of mud and that at least 45 people, including Tohir’s sister and her two children, were buried alive.

Tohir, along with other locals, used agricultural tools to search for the missing and discovered two remains buried beneath as much as 6 meters (10 feet) of muck. After two days, rescue personnel arrived to assist in the search.

On November 23, 2022, in Cianjur, West Java, Indonesia, rescuers use a heavy equipment to dig through muck in search of victims following a landslide caused by an earthquake.
AP

Tohir stated that the government’s response to this calamity was insufficient. “They should bring in big machinery to expedite this,” he remarked.

However, he stated that he will not give up until his sister and nieces are extracted from the dirt.

In numerous hard-hit regions, water, food, and medical supplies were being delivered from trucks, while military soldiers with food, medication, blankets, field tents, and water tanks were deployed by the government.

In various communities of the Cianjur area, volunteers and rescue services created additional makeshift shelters for the homeless.

Most were barely shielded by improvised shelters that were pummeled by monsoon rains. Few were fortunate enough to be shielded by tents covered with tarps. As emergency help was brought to the region, people reported running out of food, blankets, and other assistance.

Suharyanto said that more than 58,000 survivors were relocated to shelters and that 1,083 individuals were injured, with roughly 600 still getting treatment for severe injuries.

He said that rescuers have retrieved 268 dead from fallen buildings and landslides caused by the earthquake, with at least 151 people still missing. However, not all of the deceased have been recognized, therefore it is likely that some of the bodies recovered from the wreckage belong to those on the list of the missing.

Suharyanto stated that rescue activities were concentrated on around a dozen villages in Cianjur where people were still thought to be stranded.

Suharyanto stated in a Tuesday evening virtual press conference that more than 22,000 dwellings in Cianjur were destroyed and that the agency was still gathering data on damaged houses and buildings in the city.

Indonesia is routinely struck by earthquakes, many of which are far more powerful than Monday’s, which caused very little damage. However, the region is densely inhabited, and experts say that the shallowness of the earthquake and the lack of infrastructure led to the extensive damage, which included collapsed roofs and massive mounds of bricks, concrete, and corrugated metal.

The epicenter of the earthquake occurred in the remote, hilly Cianjur area, where one woman said that her house began to “shake like it was dancing.”

More than 2.5 million people reside in the Cianjur area, including around 175,000 in the same-named capital city.

On November 23, 2022, rescuers search for victims of a landslide caused by an earthquake in Cianjur, West Java, Indonesia.
AP

Ridwan Kamil, the governor of West Java, stated that many of the victims were public school pupils who had completed their courses for the day and were attending supplementary lessons at Islamic institutions when the buildings fell.

Tuesday, President Joko Widodo visited Cianjur and offered to rehabilitate infrastructure and grant up to 50 million rupiah ($3,180) in government support to each individual whose home was damaged.

Due to its location on the arc of volcanoes and fault lines in the Pacific Basin known as the “Ring of Fire,” the country of more than 270 million people is often affected by earthquakes, volcanic eruptions, and tsunamis.

»Search efforts intensify after a quake kills 268 in Indonesia«