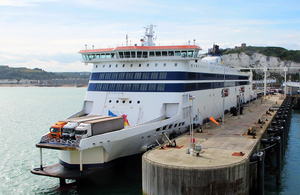 Tens of thousands of seafarers must be paid an equivalent to UK national minimum wage in a major step forward on pay protection, confirmed today (10 May 2022) by the government.

The new legislation will ban ferries that don’t pay their workers the equivalent to minimum wage from docking at UK ports.

Announced in the Queen’s speech, the government will implement the changes in the next parliamentary session and will consult closely with the ports and maritime sector on the new laws.

In addition to The Harbours (Seafarers’ Remuneration) Bill on securing an equivalent to the UK national minimum wage for seafarers regularly entering UK ports, the government is continuing positive bilateral discussions with France, the Netherlands, Spain, Germany, Ireland and Denmark.

We will stop at nothing to make sure seafarers in UK ports are being paid fairly. P&O Ferries’ disgraceful actions do not represent the principles of our world-leading maritime sector and changing the law on seafarer pay protection is a clear signal to everyone that we will not tolerate economic abuse of workers.

We will protect all seafarers regularly sailing in and out of UK ports and ensure they are not priced out of a job. Ferry operators that regularly call at UK ports will face consequences if they do not pay their workers fairly.

The consultation on the proposed measures opens today and will last 4 weeks. It will examine what sort of vessels could be included beyond ferries and what the enforcement measures will be. Options under consideration include surcharges, suspension of port access and fines.

In contrast to P&O Ferries, which has shown utter contempt for its workforce, this government is firmly committed to ensuring that a fair day’s work gets a fair day’s pay.

By ensuring that seafarers working on ships that regularly call at UK ports are paid an equivalent to the minimum wage, today’s plans will be a boost for thousands of hard-working staff, while shielding them from any future exploitative actions by rogue businesses.

The new laws mean that all ferry operators that regularly call at UK ports will be legally obliged to pay an equivalent to the UK national minimum wage in order to access those ports, closing a legal loophole between UK and international maritime law that P&O Ferries ruthlessly exploited.

In pursuit of a fairer deal for seafarers, this year the government will hold an international summit on seafarers’ rights to improve conditions for seafarers around the world.