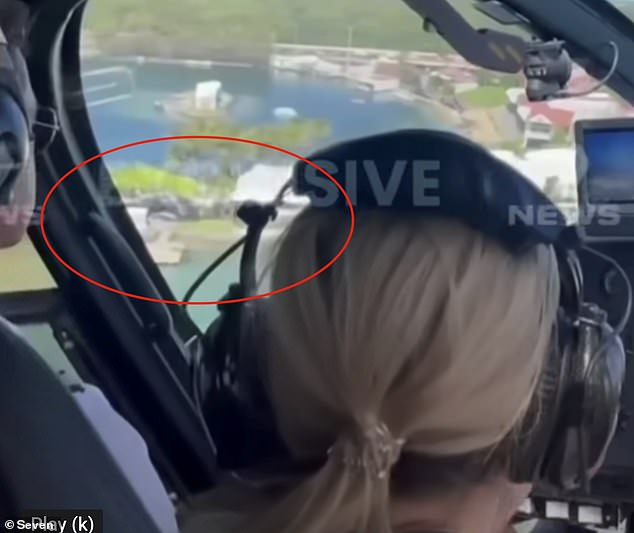 Moments before impact, the deadly Sea World helicopter that crashed and killed four people can be seen in frightening footage captured inside the cockpit of the aircraft it struck.

Aviation specialists have analyzed the eerie footage and identified important moments, including the dying seconds of lead pilot Ash Jenkinson and his passengers.

One now feels that the tragedy may have been the result of a terrible coincidence in which both helicopters were in each other’s blind zones.

The footage suggests the ascending helicopter may have been obscured from the view of the ing pilot by the cockpit fuselage.

And the descending helicopter, which was above and to the right, may have been obscured by the angle at which it was above Mr. Jenkinson, who was on the opposite side of his aircraft from two right-side passengers.

The passengers’ frantic warnings to the pilot may have been masked by engine noise, and their microphones may have been muted by incoming radio transmissions.

Nicholas Tadros, age 10, is on life support and in serious condition, while Leon de Silva, age 9, and mother Winnie, age 33, are in stable condition with multiple injuries.

Michael James, 52, filmed the footage in the second helicopter carrying New Zealanders Riaan and Elmarie Steenberg, Marle and Edward Swart, and a tourist from Western Australia.

As the clip begins, it sweeps across the cockpit and the horizon, revealing Mr. Jenkinson’s Eurocopter 130 helicopter to be already in the air and terrifyingly close.

It is briefly spotted approaching Mr. James’ identical helicopter, but the veteran pilot appears oblivious to the danger as he looks to the right.

It seems possible that the other aircraft was concealed by the cockpit pillar to his left.

Mr. Thomas stated, “The other helicopter that has taken off is in a blind place.”

You can actually see the other aircraft as he turns. The rear passenger can view the helicopter.

‘However, if you see the pilot, a portion of the cockpit structure obscures the helicopter, and as he rotates, it continues to obscure the other aircraft.

It is truly in his blind zone and remains there, thus he was completely blind.

Moments before contact, both the pilot and one of the passengers appear to be facing in the right direction, despite the imminent danger.

As the other helicopter closed in on Mr. James, Keith Tonkin, managing director of Aviation Projects, believes he may have been focused on where he was going to land and events to the right.

The aviation consultant speculated that the pilot may have been preoccupied with where he was and where he was headed.

I am unsure if he has been distracted.

He may have been focusing on something he deemed essential at the moment.

Two passengers with a different perspective on the outside view detect the danger and appear to point out the aircraft until one of them desperately touches the pilot on the shoulder to warn him.

The tourist braces for contact as the pilot turns to face him, just as the cockpit explodes in a shower of shattered glass and metal as a result of the collision with the second helicopter.

The video has sparked curiosity as to why the passengers did not appear to speak over their radio headset intercom devices.

Two passengers with a different perspective on the outside view detect the danger and appear to point out the aircraft until one of them desperately touches the pilot on the shoulder to inform him.

It is possible that passengers’ urgent cries to the pilot were drowned out by engine noise and that their microphones were muted by incoming radio transmissions.

However, according to Mr. Thomas, their mics may have been muted as a result of incoming radio transmissions overpowering the in-aircraft discussion.

Mr. Thomas stated, “It is possible that the microphone was muted because there was some other conversation occurring and being received.”

It could have been a helicopter shouting “I’m lifting up” or taking off, or something along those lines. Who knows what the alternative message could have been?

However, it is possible that the passengers might hear it. He could have spoken with him, but it was evident that a tap on the shoulder led to him bracing himself for impact.’

The terrible impact was revealed in a longer version of the film that depicted the cabin ripped open with glass and metal strewn everywhere.

As the horizon swirls outside, the wreckage of the helicopter’s front fuselage reveals a clear view of the blue sky, and the sound of the rotor blades can be heard plainly.

The lack of control caused the aircraft to flip over and smash into the sandbar below, killing four people inside.

Nevertheless, Mr. James somehow regained control of his aircraft despite the shock and anxiety of the circumstance and the serious damage to the flight controls.

In astounding images, he skillfully brought the damaged aircraft down in a safe crash landing adjacent to the other helicopter’s mangled wreckage.

One aviation expert believes that both helicopters were in each other’s blind spot, which may have contributed to the disaster.

Mr. Tonkin praised the pilot’s ability and mental fortitude to respond under the circumstances.

“The pilot did an amazing job,” he remarked. “There is no doubt about that. The front of the helicopter was completely destroyed.

It would have been incredibly disorienting. In your head, you’re doing something and predicting your flight route, and then suddenly…

‘Lacking control of the airplane and being surrounded by such destruction and damage will be quite confusing. It would not be anticipated.

‘It is also doubtful if the pilot had full instruments and the knowledge he would ordinarily need to land a helicopter.

The fact that he safely landed it is astounding.

In a statement released on Thursday, the New Zealanders who survived the disaster thanked the heroic pilot Michael James for saving their lives.

“To our pilot, who, despite the turmoil, safely landed the helicopter, protecting us and other onlookers.” You are a hero to us. Thank you so much,’ they responded.

Our sincerest condolences are extended to the injured, the bereaved, and their families.

“We are thankful and blessed to have been spared, but we are heartbroken for those who lost loved ones and for the children and mother who are battling for their lives in the hospital.

Our hearts are so full of sorrow for them.