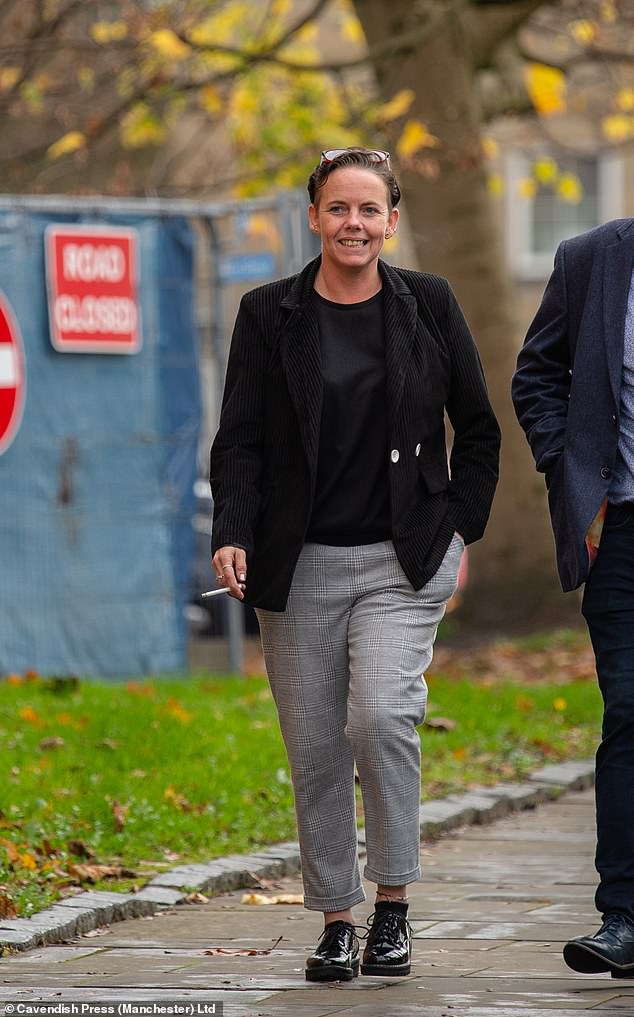 A reputable school administrator misappropriated thousands of pounds allocated for disadvantaged students in order to subscribe to Amazon Prime and purchase herself luxurious household items.

45-year-old Jemma Stamford was put in control of the finances of an educational trust that operates schools in disadvantaged regions; nonetheless, she used the funds to buy an electric hair curler, abs trainers, lingerie, and clothing.

During a three-year period, the mother of two diverted around £17,000 to her own bank account before the thefts were discovered by senior colleagues during an audit.

She later claimed that she compensated her son’s drug suppliers, but investigations revealed that she only gave them £180 and spent the rest on herself.

Jemma Stamford, shown leaving Bolton Crown Court after being convicted of stealing more than £16,000 from Bolton Impact Trust in Greater Manchester, where she worked as a manager, she grinned.

The photographed mother of two initially claimed she had taken the money to pay off her son’s drug debt, but investigations revealed she had spent the majority of the money on expensive products.

At Bolton Crown Court, Stamford, of Horwich, who was stationed at Lever Park School, was sentenced to nine months imprisonment suspended for two years with no order for compensation after pleading guilty to fraud by abuse of position between 2016 and 2019.

Bolton Impact Trust in Greater Manchester was robbed for a total of $16,312.15.

Stamford, of Horwich, who was based at Lever Park School, risked jail time at the Bolton Crown Court after pleading guilty to fraud by abuse of position between 2016 and 2019, however she was sentenced to nine months suspended for two years without compensation.

As she left the hearing, she was spotted grinning.

The court heard that the Trust utilized a cashless payment system in which students purchased goods with pre-paid cards.

Prosecutor Neil Ronan stated that parents loaded the cards with cash that was deposited into a Stamford-controlled account.

Mr. Ronan stated that the trust’s Finance Director, David Smith, was alerted to accounting errors in November 2018 while conducting an end-of-year review.

Mr. Smith and the other faculty members were aware that the defendant would be held accountable for the missing cash when they invited her to a May 2019 meeting. She initially denied any wrongdoing, but after being questioned repeatedly and having the significance of the missing monies emphasized, she eventually revealed that she had withdrawn some money from the account.

Stamford claimed she took the money to pay off a drug dealer who owed her son money.

Further research revealed that she used the stolen funds to open an Amazon Prime account and purchase lingerie, clothing, hair curlers, and an abs trainer.

Mr Ronan continued, ‘It must be made apparent to the court that she was telling the truth about her son’s creditors and that she provided screenshots of her communications with the dealers.

But the amount she owed them was only £180, which was far less than the total sum ascribed to her deception.

Recorder Mark Ford KC ordered Stamford to complete 15 days of rehabilitation as part of his sentence.

Stamford was sent to the police, and he declined to comment during an interview. She is currently living with her cousin and has no prior offenses.

The defense attorney, Alexandra Sutton, stated that her client feels “immense regret and remorse” and has experienced “severe emotional and professional stress.”

She stated that she and her husband had separated and that she was concerned about her son’s contact with drug dealers.

Ms. Sutton added that her client started drinking to cope with her concerns. She stated that Stamford was willing to compensate her for the stolen funds.

Recorder Mark Ford KC ordered Stamford to complete 15 days of rehabilitation as part of his sentence.

He stated, “This offense lasted three years, and you only stopped because you were apprehended. However, I understand that you had low self-esteem at the time, which contributed to your habit of making impulsive purchases.

“Throughout those three years, you made tiny but frequent transactions with the money you stole from the trust’s account, and by the end, you became desensitized to the nature of your criminal conduct.

“Your actions have made it more difficult for the organization you worked for to do their duties and assist the children they were meant to serve. Since then, however, you have pulled yourself up by your bootstraps, and I do not wish to jeopardize your success by sending you to prison