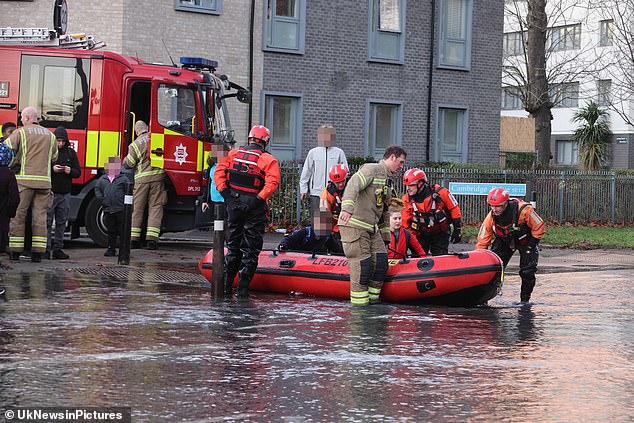 A pipe break resulted in six feet of water on Meadowcourt Road and Eltham Road in Blackheath, prompting the dispatch of 70 firemen to the scene.

Three basement apartments have been flooded to a depth of around 20 centimetres, along with the fire station.

After consumers in the region complained poor water pressure or no water, Thames Water said it was doing everything possible to restore service as soon as possible.

A spokesperson for Thames Water said, ‘We’re sorry to customers who are experiencing low pressure or no water following a large burst pipe earlier this morning on the A20 Eltham Road, in SE12.

‘Our engineers are currently working to shut off the flow of water from the burst. Once we’ve done this, supplies should start to return to the affected area.

‘We’d also like to apologise to drivers affected by the closure of the A20 and for the disruption this has caused.

‘We’ll do all we can to get things back to normal as quickly as possible.’

The London Fire Brigade said, ‘Ten fire engines and around 70 firefighters have been called to flooding on Meadowcourt Road in Blackheath and Eltham Road.

‘Crews are working to divert flood water after a water main ruptured, flooding an area of around 600m x 200m.

‘Three basement flats have been flooded to a depth of around 20cm and the fire station has also been affected by flood water.

‘The Brigade was called at 0438. Fire crews from Lewisham, Eltham, East Greenwich and surrounding fire stations are at the scene.’