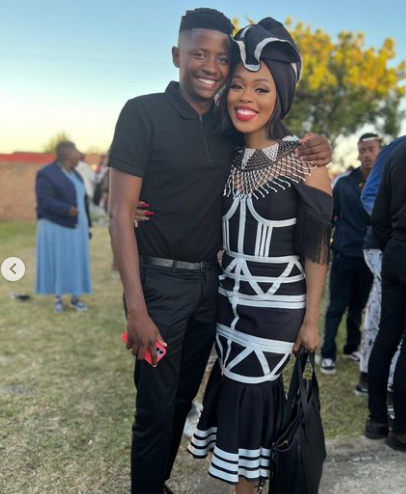 Former Scandal! actress Sivenathi Mabuya – who played Xolile Langa in the e.tv soapie married her boyfriend Aphiwe Bukani during a traditional ceremony that was attended by her industry friends – Lusanda Mbane and Ayanda Daweti.

Mbane and Daweti played her mother Boniswa Langa and brother Chumani Langa respectively in the soapie.

The Umzali Wam’ actress Sivenathi Mabuya – who is famously known for playing Xolile Langa in Scandal! recently got married to Aphiwe Bukani traditionally in East London, Eastern Cape this past weekend (30 April).

Sivenathi revealed several months ago that lobola negotiations had taken place and that she had agreed to start a new journey as the wife of Bukani.

Her former on-screen mother Lusanda Mbane – who now plays the character of… in Imbewu: The Seed shared pictures of her traditional ceremony on Instagram.

Mbane also revealed that she was honoured to be the MC at her on-screen daughter’s wedding.

Sivenathi also who currently plays the role of Francina Pikoli in Mzansi Magic’s Umzali Wam also took to her social media accounts back in February to reveal her engagement and lobola negotiations are underway.

Mabuya posted a picture of herself rocking a T-shirt with the word Makoti and also shared a video showcasing the process from lobola to the welcoming of the groom’s family.

“Thank you, everyone, for the kind words and well wishes.”

“We appreciate you all” and closed it off with, “I said yes”.

“What a gorgeous bride you are @sivemabuya. A big congratulations darling. Wishing you a blessed marriage.”

The Queen actress Zenande Mfenyana also commented on her post and said: