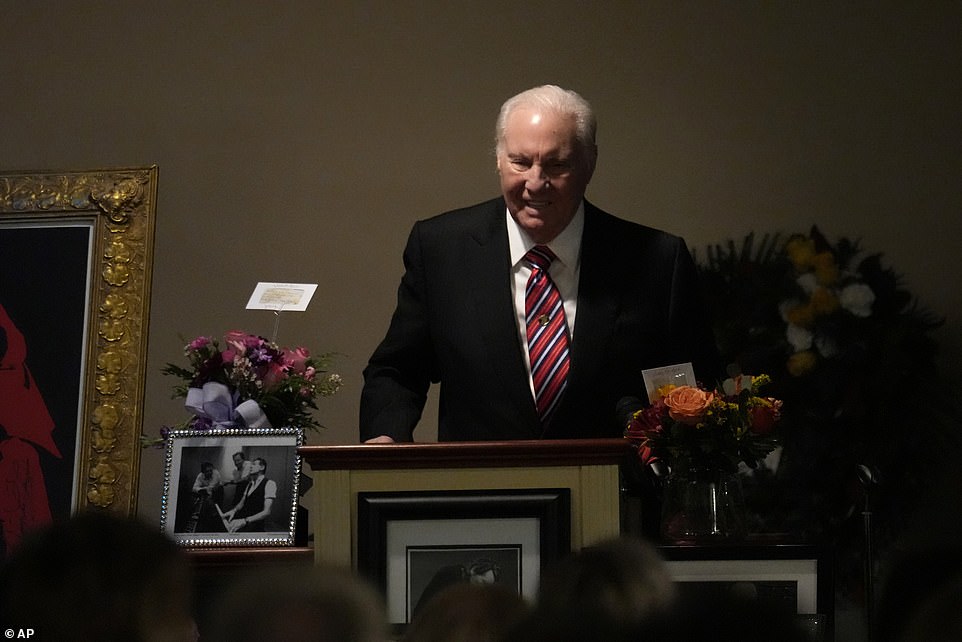 Lewis, known for classics including “Great Balls of Fire” and “Whole Lotta Shakin’ Goin’ On,” passed away on October 28 at his home in Mississippi, south of Memphis, Tennessee. He was 87.

TV evangelist Jimmy Swaggart, Lewis’ cousin, told more than 100 mourners at Young’s Funeral Home in Ferriday, Lewis’ birthplace, that when Lewis passed away, he “lost the brother I never had.”

“We learnt to play the piano together,” remembered Swaggart. I had to convince myself that he was no longer present.

This year, Swaggart and Lewis released a gospel album titled ‘The Boys From Ferriday,’ and Swaggart expressed doubt that Lewis would be able to complete the recording session.

‘He was extremely weak,’ Swaggart added. I recall saying, “Lord, I’m not sure if he can do it or not.” But when Jerry Lee sat at the piano, you knew he was limited in what he could play due to the stroke, but when the engineer stated the red light was on and he opened his mouth, he exclaimed, “Jesus, hold my hand; I need thee every hour.” Lord, hear my pitiful supplication and look down on me.

The session produced the album, and two of its songs, ‘In the Garden’ and ‘The Old Rugged Cross,’ were performed during the service. As the tapes aired, audience members were spotted wiping away tears and singing along with Lewis.

Swaggart stated, “He was one of the finest entertainers who ever lived.”

Lewis, who called himself ‘The Killer,’ was the last surviving member of a generation of musicians who rewrote the history of music, a group that included Elvis Presley, Chuck Berry, and Little Richard.

Lewis’ body was placed at the front of the funeral home’s main parlor in a closed, red casket adorned with a red rose spray. Several funeral wreaths, including one in the shape of a musical note, were hung on the walls behind and surrounding the casket, along with photographs of the singer, one of which depicted him in a red outfit while singing into a microphone.

Donnie Swaggart, the son of Jimmy Swaggart, remembered a meeting between Jerry Lee Lewis and members of the country rock band Nitty Gritty Dirt Band that emphasized Lewis’ funny side.

According to him, Lewis and his father were headed toward the arena’s exit as the band members were entering.

As they approached Lewis, one inquired, “Is that who I believe it to be? Could it be Jerry Lee Lewis?” One of the men asked Jerry Lee as he passed, “Are you Jerry Lee Lewis?” Jerry Lee stopped and looked each of them over before saying, “Boys, my name is Killer, and music is my thing.” Then he walked away.’

Donnie Swaggart stated that the men stood there with their mouths agape. He said as the audience chuckled, “What a sense of humor he had!”

After his personal life imploded in the late 1950s as a result of his marriage to his cousin, 13-year-old — or possibly 12-year-old — Myra Gale Brown while still married to his first wife, the pianist and rock rebel was blacklisted from radio and his earnings plummeted to almost nothing. Throughout the subsequent decades, Lewis struggled with substance misuse, legal conflicts, and physical ailments.

Jimmy Swaggart stated, “He always had a heart for God, even in his lowest moments.” “I shall miss him very dearly, but I am grateful that we know where he is now.”

Xavier Ellis, a native of Ferriday who currently teaches in Opelousas, Louisiana, stated that Lewis’ life is an inspiration.

He was a poor child from Ferriday who ascended to great heights. I am quite amazed by his life narrative. Ellis stated, “I am grieved by his departure, but his legacy will endure.”

Lewis rebuilt himself as a country artist in the 1960s, and the music industry eventually forgave him. From 1967 to 1970, he had a string of top 10 country songs, including “She Still Comes Around” and “What Made Milwaukee Famous (Has Made a Loser Out of Me)”.

Lewis, along with Elvis, Berry, and others, was inducted into the Rock & Roll Hall of Fame in 1986, and he joined the Country Hall of Fame this year. His life and music were reintroduced to younger audiences in the films ‘Great Balls of Fire’ (1989) starring Dennis Quaid and ‘Trouble in Mind’ (2022) directed by Ethan Coen.

In 1987, Lewis earned a Grammy for an interview album that was recognized as the greatest spoken word recording, and in 2005, he won a Grammy for lifetime achievement.

The board of the Library of Congress’ National Recording Registry selected ‘Whole Lotta Shakin’ the next year, praising the ‘propulsive boogie piano that was wonderfully balanced by the thrust of J.M. Van Eaton’s aggressive drumming. During the performance, both the recording’s listeners and Lewis himself had trouble remaining sitting.

Tom Tomschin and Sandra Tomschin of Cicero, Illinois traveled to Ferriday to honor Lewis for his contributions to the music industry.

Tomschin stated, “We felt the need to pay our respects to the rock ‘n’ roll pioneer who was instrumental in the invention and development of the music.” I have been a fan my whole life.

Tomschin, 45, a government administrator, said ‘Crazy Arms’ and ‘You Win Again’ are two of his favorite songs by Lewis, who he described as one of a kind.

Tomschin stated of Lewis, “He never led a life behind a curtain.” In his ups and downs, good and terrible, he did what he intended. Jerry Lee Lewis put everything on the table. There will never be another individual like Jerry Lee Lewis.

Sandra Tomschin, a 44-year-old library director, stated that Lewis’ music had made an unforgettable mark on her life.

“We adore it,” she declared of his music. Even though he is no longer with us, his concerts will continue to live on in our hearts.