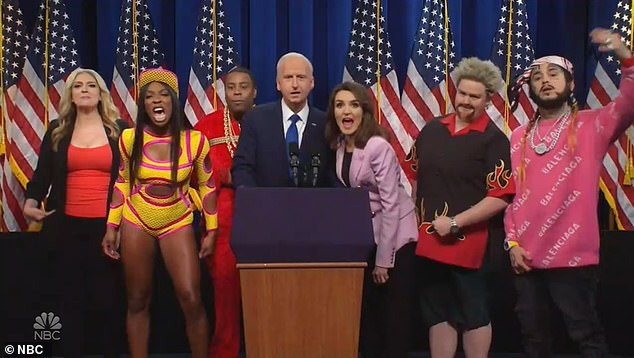 With only days remaining until the midterm elections, Saturday Night Live’s cold open implied that the Democrats will suffer a crushing defeat on Tuesday.

James Austin Johnson, who portrays Vice President Joe Biden, might be seen in a moment of desperation “making some last-minute alterations” to the list of Democratic contenders for office, bringing in candidates with greater star power.

“Dear fellow citizens. The destiny of our democracy will be determined by midterm elections on Tuesday. And let’s just say: big yikes!’ he began.

“We no longer have any stars. Too many Raphael Warnocks and too few Herschel Walkers,’ continued Johnson’s Biden.

Which is why we’re going to make some last-minute alterations before Tuesday with the exciting Democrats. For instance: California, are you sick of Adam Schiff? Meet your next representative. She stood for president in 2020, and she is a crystal enthusiast. This is Marianne Williamson!’

As he continued to impersonate the bewildered 79-year-old Chief Executive, the comedian’s Biden declared, “I’m trying like hell, I swear.” “Every morning I’m on the Peloton, courting doom.”

Stormy, portrayed by Cecily Strong, stated, “I may be a former adult star on Season 7 of The Surreal Life, but I’m willing to debase myself and enter U.S. politics.”

Then, Ego Nwodim surfaced as the new candidate for the Florida Senate, the musician Azealia Banks.

In one of the few humorous lines of the cold open, she said, “I’ll work with anyone and I’m willing to stretch across the aisle to get things done.” Biden answered, “I believe it’s time to reach across the aisle,” in response to Johnson’s remark.

Biden then recited a number of legislative achievements that have been undermined by MAGA rhetoric.

He then noticed how audiences at campaign rallies continue to laud Barack Obama. Saturday, in reality, the former president was campaigning in Pennsylvania. “How do you think I feel about that?” Biden of Johnson asked. “Do yourself a favor and Google “young Joe Biden” before beginning your bubble bath.”