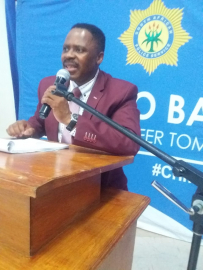 On Tuesday, Linda died away after a protracted illness.

Masemola said the senior officer, with 36 years’ service, “was an exemplary detective and a champion for justice for GBVF victims”.

“He was a greatly respected detective, who was devoted to the call of serving, protecting and securing lengthy convictions for crimes against women, children and vulnerable groups,” said Masemola.

In 2016, Linda was chosen to serve as the Deputy Provincial Commissioner (DPC) for Crime Detection in Limpopo. He entered the service in 1986 as a student constable and worked his way up through the ranks to the rank of Major General.

As National Component Head: Family Violence, Child Protection, and Sexual Offenses Investigations, he was relocated in 2018 to manage the SAPS 176 FCS and nine Serial and Electronic Crime Investigations (SECI) units.

Linda investigated numerous high-profile cases, including that of convicted child serial rapist Fanwell Khumalo, who in 2004 was sentenced to 42 life terms for 38 rapes and four attempted rapes by the Johannesburg High Court.

Khumalo, a former chef who had catered to visiting Hollywood celebrities at Gold Reef City, was arrested on March 7, 2001 by a team lead by Linda, the investigative officer.

In 2016, Linda was received the National Commissioner’s certificate of recognition for exemplary service, among other honours and accomplishments.

“The organisation has lost one of its highly decorated, celebrated and dedicated detectives, who put the women, children and men of this country first through his dedication of serving. He was a man who understood his calling and remained committed to providing closure for victims and survivors of GBVF related crimes.

“His passing will be felt by all those who served with him and the victims and the families of the victims he assisted,” said Masemola.

Masemola commended Linda for his service to the country and for diligently pursuing suspects and painstakingly solving cases to secure the triumph of justice.