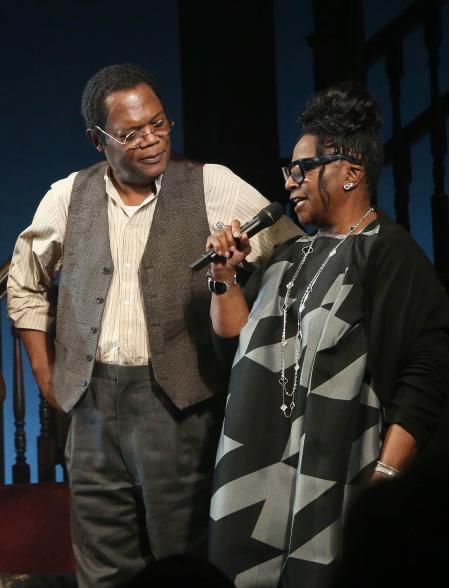 According to reports, the power couple had an altercation in the press room, and Sam ended up leaving; but, according to one event organiser, he was never scheduled to remain for the whole event.

A spy at the dinner, which honoured the Jacksons, told Page Six exclusively, “They apparently were in a fight when they arrived. They posed for pictures together and then the fight [went on]. ”

According to a second source, the two were involved in an altercation in the press area of the Edison Ballroom in Midtown, and Sam seemed angry.

Sam left the event before the couple was recognised, and “LaTanya accepted solo,” according to the initial source. Vanessa Williams presented the award.

On Broadway, LaTanya is presently directing Sam in the highly praised production of August Wilson’s “The Piano Lesson.” They’ve been together for 42 years.

According to the audience, LaTanya also claimed that her spouse departed the event because to COVID-19 concerns.

A rep for the gala told us when we reached out for comment: “As the top-billed star of ‘The Piano Lesson,’ Mr. Jackson is extraordinarily cautious about the risk putting the production in jeopardy by exposing himself to COVID-19. Ms. Jackson accepted on behalf of both she and her husband simply to minimize his risk of exposure. Mr. Jackson had only ever planned on doing photos and then leaving, as everyone involved with planning the event knew in advance.”

The spokesman added: “It was a magical evening, and they helped raise a record haul of more than $300,000 to support TCG’s mission of creating a more just and equitable theater ecology.”

Previously, the celebrity stated of their union, “It’s two people who respect each other, love each other, and look out for each other.”