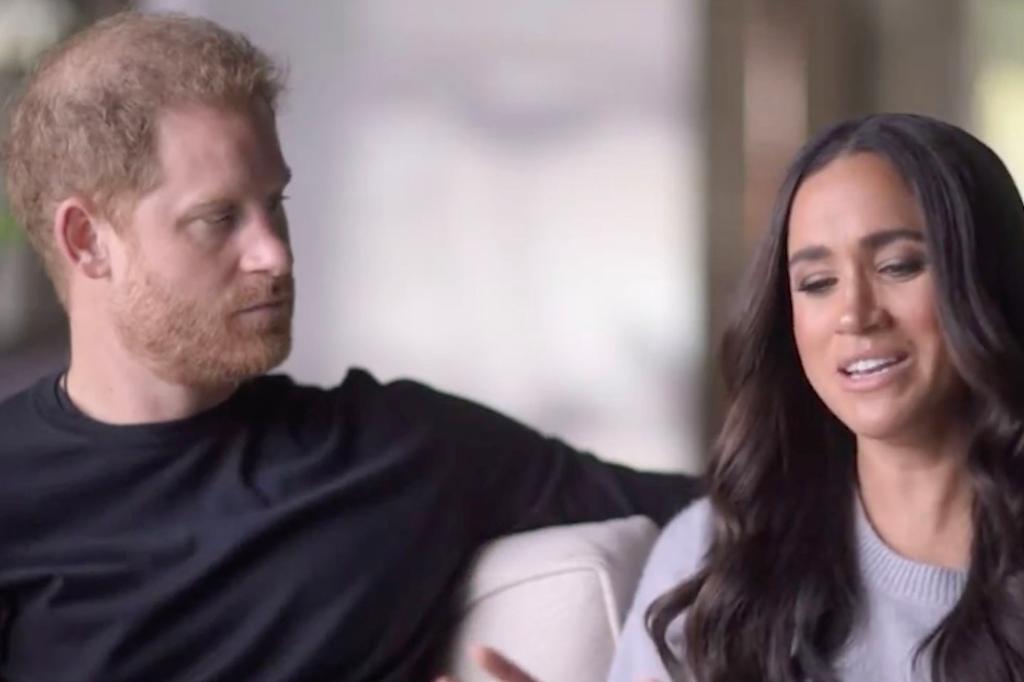 Meghan’s half-sister told TMZ on Saturday that her father is more concerned with his health, and that she is shielding him from the “disrespectful” Netflix documentary.

Samantha, 58, told the source that she does not believe Thomas, who is recovering from a stroke he sustained this year, would even want to watch the series because it has been detrimental to his health.

The Duke and Duchess of Sussex discussed their estranged relationship with Thomas, 78, and Samantha in “Harry & Meghan,” which was released on Thursday.

In their new Netflix documentary, the Duke and Duchess of Sussex discussed their rocky relationship with Thomas.
Netflix

As Meghan, 41, rose to royal prominence, the author accused her half-sister of lying to the press about their connection.

Samantha Markle says that she and Meghan had a strong relationship until 2018 and that the media has invented remarks attributed to her.

Samantha Markle, seen above, and Meghan have been estranged for years.

The former “Suits” actress stated, “My half-sister, whom I hadn’t seen in over a decade — and then only for a day and a half — suddenly seemed to be everywhere.”

In contrast, Meghan’s relationship with her father began to deteriorate as her royal wedding to Harry, 38, approached.

Meghan stated in the documentary that she was instructed by the royal family’s communications staff to contact Thomas to determine if he was taking money to stage images in collusion with the media.

“H and I called my dad. I stated, ‘Look, they claim that you accept payment for stage shots from tabloids. Is this accurate? “He said no,” she remembered.

The mother of two stated that she promised to relocate her father out of Mexico before the media descended upon his home once the scandal broke.

Thomas did not attend Meghan and Harry’s royal wedding in May 2018.

“And he responded, ‘No, I have obligations'” And it seemed so secretive,” Meghan revealed. “I was like, ‘It doesn’t make sense.’ And as the call ended, I looked at H. I was thinking, “I have no idea why, but I don’t believe him.”

In the week coming up to Harry and Meghan’s wedding in May 2018, Thomas stopped returning their phone calls.

“Instead, you are conversing with TMZ. The tabloid informed me that you would not be attending our wedding, the “Archetypes” podcast host added.

Harry stated that he is responsible for Meghan’s bond with her father.

Harry stated that he “shouldered” responsibility for the altered relationship between his wife and her father.

In the third episode of the docuseries, he stated, “Of course, what transpired is very tragic.” Before this, she had a father, but she no longer has one.

Meghan’s father and she exchanged their final text message when he was recovering from heart surgery prior to her and Harry’s wedding.

The first three episodes of “Harry & Meghan” are currently available to watch on Netflix.