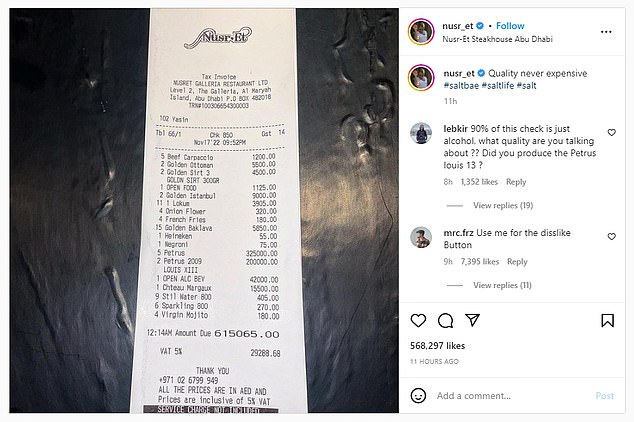 Salt Bae has been criticized on social media for boasting about a customer’s £140,584 bill, which included a steak that cost £1,004.

The Turkish millionaire chef, renowned for his gold-leaf steaks and distinctive salt-sprinkling posture, was criticized on Instagram by readers who referred to the rates as “crazy” and “pure ego.”

Who the astronomy tab belongs to is unknown. However, a number of notable individuals are presently in Abu Dhabi for the season-ending Formula One event this weekend and the start of the World Cup on Sunday in neighboring Qatar.

However, the diners did not stop there. In addition, they spent 1,200 dirham (£273) on five servings of beef carpaccio, a raw meat appetizer, and 320 dirham (£73) on four blossoming onions.

The Nusr-Et Steakhouse charged 405 dirham (£92) for nine bottles of plain water and 270 dirham (£62) for six bottles of sparkling water.

Salt Bae uploaded a photo of the bill to Instagram with the comment “Quality is never pricey #saltbae #saltlife #salt” for his 49 million followers.

Following this, Salt Bae got a flood of criticism from other social media users, with over 597,000 likes and 26,500 comments, the most of which were appalled by the cost.

One commenter remarked, “This is ridiculous, that kind of money could save the lives of an entire community.” This is dreadful.’

Numerous customers were stunned by the price and deemed it “crazy.”

Another user commented, “There are approximately 98 million people living below the poverty line and without a home, and you are spreading lies?! What is the point of posting such material? I will unfollow you and encourage others to do the same… shame on you!’

Someone else wrote, “55 dollars for a Heineken so you may ruin the food with gold leaf and salt your hairy arms.”