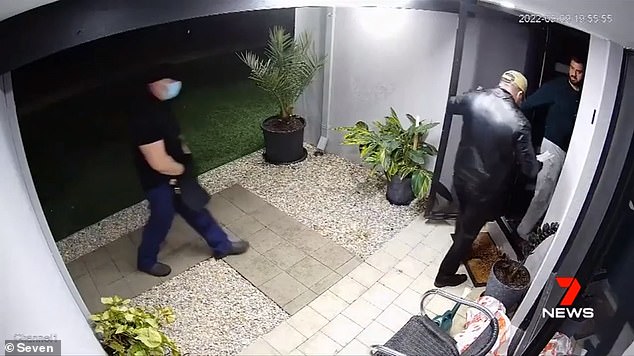 Two men are accused of posing as police officers in an effort to trick a homeowner into allowing them access to his property so they could amputate his hands and tongue in exchange for cash.

CCTV captures the moment Sabah Al-Salem is awakened from his bed at the Canning Vale residence in south Perth by the men.

Following the alleged mutilation plot on September 9, detectives have now charged three men, and Mr. Al-Salem has spoken out about the incident and demanded explanations.

He told 7News that the claimed encounter “felt” like it happened in the Middle East rather than Australia and that he would want to find out who reportedly offered him $25,000 in return for his hands and tongue.

The men, according to him, were wearing black clothing, gloves on their hands, and masks over their faces.

Iraqi refugee Mr. Al-Salem initially had no idea that it was a ruse. Before one of the claimed fake detectives handed him a card with the logo of the Western Australian police, he demanded the men show him their identification.

They are shown in the video presenting him what seems to be a search warrant while reportedly knowing his identity.

Mr. Al-Salem, who was still standing at his front door wearing tracksuit pants and slides, scanned the paper in confusion.

After realizing the strangers weren’t the genuine stuff, Mr. Al-Salem ordered the men to leave the property while he called for assistance.

He remembered yelling, “You mafia, you’re not cops, go on the outside.”

The men entered his residence violently, according to surveillance video.

They brought their luggage inside, purportedly containing “torture instruments” including straps and a saw.

People came to torture me and chop off my hands, Mr. Al-Salem said. One of the men produced straps from his back pocket and demanded that I show him my hands so that he could bind them.

The two men then fled the house after being startled by something.

The men were accused with planning to do great bodily injury, acting suspiciously and seeming to be a public official, and planning an aggravated home invasion.

A second guy has also been accused with conspiring to conduct an offense that is punishable by law.

More arrests may be made, according to police, who indicated they had not yet resolved the investigation.

Mr. Al-Salem said he is in need of explanations and is still unsure of the identity of the accused assailant.

Who murdered me after receiving thousands of dollars in payment? Still, the cops won’t inform me, he complained.