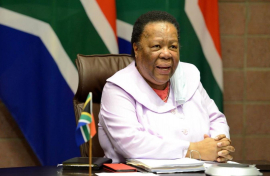 South Africa has released a statement strongly denouncing the riots that took place in Brazil on Sunday.

In the capital city of Brasilia, the Congress and Supreme Court buildings were attacked by rioters.

According to media sources, over 1,500 individuals have been detained in connection with Sunday’s rioting. They occurred a week after President Luiz Inácio Lula da Silva was inaugurated in after Brazil’s divisive election in October.

“South Africa notes that the majority of the people of Brazil accepted the outcome of last year’s free and fair general elections. The actions of the rioters will not succeed in undermining the will of the majority,” said the Department of International Relations and Cooperation.

It said that South Africa maintains its respect and trust in the democratically elected administration of President da Silva.

Dr. Naledi Pandor, Minister of International Relations and Cooperation, will welcome her Turkish colleague, Mevlüt avuşolu, for political discussions on Tuesday in Pretoria.

It is anticipated that the Turkish Minister’s visit would strengthen political and economic ties between the two nations and increase awareness of regional and global challenges.

“South Africa and Türkiye maintain strategic bilateral political, economic and cultural relations that were established in 1991.

“Bilateral trade between the two countries has seen a gradual growth over recent years. During the period April to November 2022, South African exports to Türkiye increased by approximately 18 percent.

“Türkiye remains a key investment partner for South Africa and has already invested in several projects with direct capital investment estimated at about R156.80 million over the past decade,” said the department.

During the Investment Conference conducted by President Cyril Ramaphosa in March 2022, Defy, which is owned by the Turkish business Arcelik, pledged R317 million towards its manufacturing factory in KwaZulu-Natal.

Turkey contributed 25 firms to the Africa Aerospace and Defence (AAD) Expo in September 2022, double the amount of space it occupied in 2018.

»SA issues a statement to condemn riots in Brazil on Sunday«