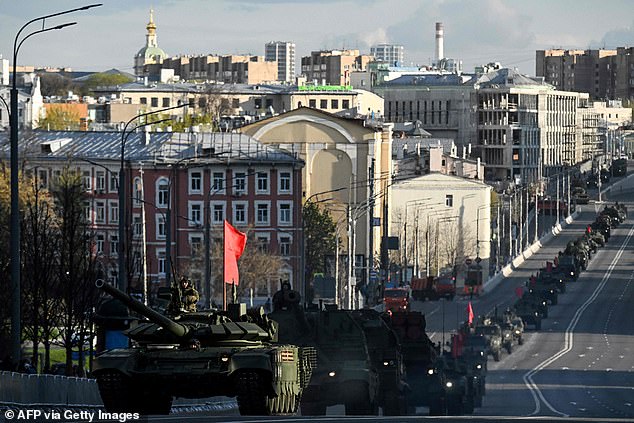 The UK’s Ministry of Defence has concluded that Russia’s latest and most advanced tanks are still vulnerable after one was blown up by Ukrainian forces.

A modern T-90M tank, the most formidable in the Russian army, was caught on camera being hit and destroyed by a rocket in the north-eastern Ukrainian region of Kharkiv Oblast.

The development will hearten NATO planners as the Ministry of Defence states that the conflict in Ukraine is taking a heavy toll on some of Russia’s most capable units and most advanced capabilities that they will struggle to replace due to Western sanctions restricting access to vital components such as microelectronics.

‘The T-90M was introduced in 2016 and includes improved armour, an upgraded gun and enhances satellite navigation systems,’ the MoD tweeted in a regular bulletin on Saturday.

‘Approximately 100 T-90M tanks are currently in service amongst Russia’s best equipped units, including those fighting in Ukraine.

The Ukrainian Ministry of Defence claims 1,122 Russian tanks destroyed as of May 7 2022 from a total of 2700 main battle tanks at the start of the war, according to the IISS (International Institute for Strategic Studies).

But Russian tank stocks, while formidable on paper, are largely of older, obsolete Soviet designs, such as the T-62 and T-70. Although they can be upgraded, it was thought that they would be more vulnerable to Western ATGMs than the latest T90M.

The armour on the T-90M is designed to explode when hit by an anti-tank missile,  blunting the penetrative power of the incoming round.

But missiles such as the Javelin are fitted with two warheads; one blows away the reactive armour, and the second pierces the chassis underneath.

The T-90M is also protected with a automated defence system which fires smoke grenades when it is ‘painted’ by a laser beam used by an incoming missile, but it is so far unclear how effective this system is.

But despite all this, the Ukrainian military released drone footage of a Russian armoured unit which resulted in the destruction of the £4million tank as well as a thermobaric multiple rocket system.

The Command of the Special Operations Forces (SSO) of the Armed Forces of Ukraine (AFU) said Monday: ‘The Resistance Movement of the SSO of Ukraine is working.

‘In the Kharkiv region, during reconnaissance operations, our soldiers discovered clusters of enemy equipment, including heavy armoured and lightly armoured vehicles.’

They added: ‘An hour after the priority targets for the strike were determined, soldiers of the Resistance Movement coordinated a unit of one of the artillery brigades and adjusted the fire on enemy targets.

Ukraine also claimed to have retaken five villages around Kharkiv in a counter attack north of the Donbas, where the fiercest fighting is taking place. The settlements were named as Oleksandrivka, Fedorivka, Ukrainka, Shestakove, Peremoha and part of the village of Cherkaski Tyshky.

Kharkiv, Ukraine’s second city, is just 40 miles from the Russia border and had been under constant shelling since the start of the war. Ukrainian efforts to secure the region would allow it to pressure the northern pincer of the Russian army trying to encircle the Ukrainian army in the Donbas.

One of the key weaknesses the Russian military has displayed in Ukraine is the ineffectiveness of its logistics and combined arms doctrine.

In order to protect tanks from ambushes, they require air cover and infantry support. Both necessitate complex and skilled coordination honed in training and military exercises, as well as effective communications.

And the Russian military, whilst spending billions on flashy hardware that might look impressive in military parade, apparently cut corners in these less flashy but equally vital realms.

Other factors to explain the abysmal performance of the Russian military is corruption. It is thought that Russian generals siphoned off millions of the military budget into private bank accounts in Cyprus.

All these factors have led to monumental losses for the Russian army in men and materiel that will be very difficult for Russia to make up for, the UK Ministry of Defence added on Twitter.

‘It will be particularly challenging to replace modernised and advanced equipment due to sanctions restricting Russia’s access to critical microeconomics components.