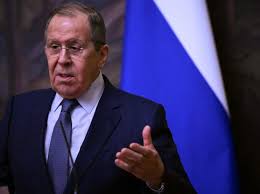 Russian Foreign Minister Sergei Lavrov warned the West on Monday not to underestimate the elevated risks of nuclear conflict over Ukraine and said he viewed NATO as being “in essence” engaged in a proxy war with Russia by supplying Kyiv with weaponry.

Lavrov, in a wide-ranging interview broadcast on state television, also said that the core of any agreement to end the conflict in Ukraine would depend largely on the military situation on the ground.

Lavrov had been asked about the importance of avoiding World War Three and whether the current situation was comparable to the Cuban missile crisis in 1962, a low point in U.S-Soviet relations.

Russia, Lavrov said, was doing a lot to uphold the principle of striving to prevent nuclear war at all costs.
“This is our key position on which we base everything. The risks now are considerable,” Lavrov said.

“I would not want to elevate those risks artificially. Many would like that. The danger is serious, real. And we must not underestimate it.”
Russia’s two-month-old invasion of Ukraine, the biggest attack on a European state since 1945, has left thousands dead or injured, reduced towns and cities to rubble and forced over five million people to flee abroad.
Moscow calls its actions a “special operation” to disarm Ukraine and protect it from fascists. Ukraine and the West says this is a false pretext for an unprovoked war of aggression by President Vladimir Putin.
Lavrov, defending Moscow’s actions, also blamed Washington for the lack of dialogue.
“The United States has practically ceased all contacts simply because we were obliged to defend Russians in Ukraine,” Lavrov said, repeating the rationale for Moscow’s invasion of its southern neighbour.

But he said ‘Western supplies of sophisticated weapons, including Javelin anti-tank missiles, armoured vehicles and advanced drones were provocative measures calculated to prolong the conflict rather than bring it to an end.’
“These weapons will be a legitimate target for Russia’s military acting within the context of the special operation,” Lavrov said.

“Storage facilities in western Ukraine have been targeted more than once, by Russian forces. How can it be otherwise?” he added. “NATO, in essence, is engaged in a war with Russia through a proxy and is arming that proxy. War means war.”

He said that Kyiv authorities were not negotiating in good faith and President Volodymyr Zelenskiy, a former actor, was like British Prime Minister Boris Johnson in playing to the public rather than addressing the task at hand; negotiations.
“They are similar in a way in their ability to play to the gallery. For example, they imitate negotiations,” Lavrov said.