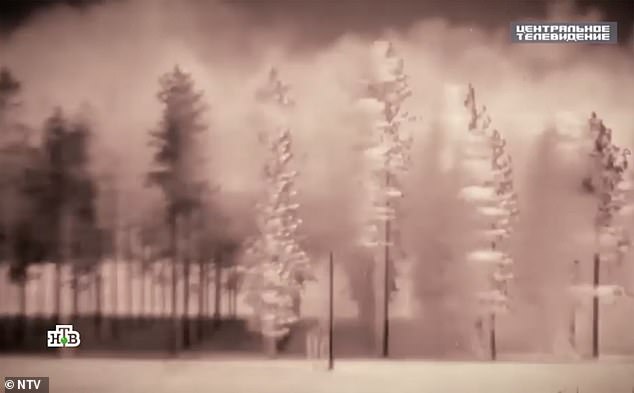 In response to demands for Putin to “take severe measures” to win the Ukrainian war, Russian media has depicted a terrifying series of mushroom clouds.

NTV broadcast disturbing video that featured nuclear blasts and the aftermath of “Armageddon.”

The Kremlin-obedient energy company Gazprom, which is already depriving the West of Russian gas for the next winter, owns the slavish channel’s media arm.

“In anticipation of nuclear war – how weapons of mass destruction have become part of the geopolitical game,” the subtitle of the series said.

Ramzan Kadyrov, the leader of Chechnya and a war enthusiast, has called on Putin to consider “declaring martial rule in the border areas and utilizing low-yield nuclear weapons” in order to recover from his most recent military defeat in Ukraine.

“We need to take more serious actions,” he continued, “but I don’t know what the Defence Ministry submits to the Supreme Commander-in-Chief [Putin].”

Lt. Kadyrov bemoaned the inability of Putin’s forces to defeat the purported “Satanists and fascists” in Ukraine.

When it comes to the ongoing escalation of the danger of nuclear Armageddon, Putin’s supporters and propagandists—along with the head of the Kremlin himself—are to blame, not the West, as was implied in the television program.

The implication seemed to be that if the West gave in to Putin’s demands about Ukraine, the risk of nuclear war would decrease.

Vasily Kashin, a military and political expert at the Higher School of Economics in Moscow, stated, “We are in a position where the West has the advantage in resources and conventional armament.”

“Russia’s nuclear arsenal is the foundation of its strength.”

Despite this, Putin was today bolstering his conventional troops with a fresh influx of military hardware being sent from Siberia, hundreds of miles distant.

Armed vehicles were seen traveling west from Krasnoyarsk, some 3,000 miles away from the fighting.

Putin supporters are very upset by Russia’s’surrender’ at crucial Lyman.

Targeting Putin’s military leadership, they are requesting support from the high command.

It’s certainly a turning point in terms of politics as well as military affairs, particularly at this time.

The issue is a system of deception that propagates positive information while the situation is negative.

This corruption is a top-down phenomenon.

The Russian military, according to a member of the defense committee in the Russian parliament, were heroes commanded by selfish donkeys.

Gurulev exploded on state television and said, “Did we not know the amount of soldiers marching on Lyman?

Where was the intellect, if not?

The 144th Division and army aviation performed well on the ground.

The [army general staff], who continue to lack understanding and refuse to take responsibility for the situation, are the real culprits, not the people on the ground.