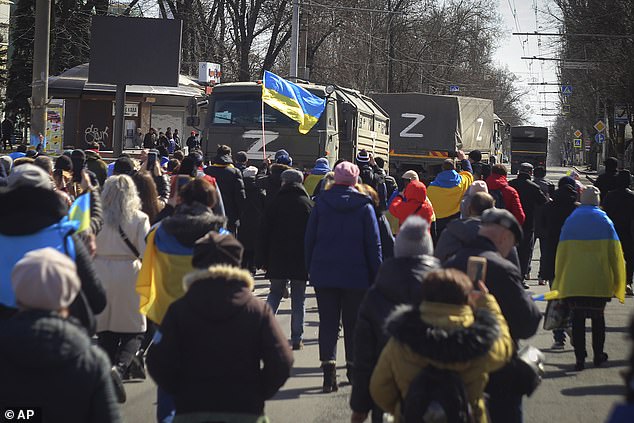 Putin’s defense minister has said that Russia will withdraw from the city of Kherson following its most humiliating defeat to date.

Sergei Shoigu, who is already under pressure for his management of the war, appeared on state television and was shown agreeing to a plan by Russia’s senior commander in Ukraine, General Sergei Surovikin, to withdraw from the city.

Surovikin informed Shoigu that the city is currently indefensible and suggested that troops be withdrawn “in the near future” to defend the opposite bank of the Dnieper River. As he accepted the plan, Shoigu writhed in his chair.

According to witnesses, Putin’s men have already abandoned critical checkpoints and demolished bridges in an apparent effort to prevent Ukrainian soldiers from taking them.

Giving lost Kerson, the capital of a province that Putin annexed to Russia just weeks ago, his lone toehold west of the Dnieper River, and a critical checkpoint on the way to Crimea, is the most humiliating defeat his military has ever endured.

Russia seized Kherson (pictured) in March, and Putin annexed the region a few weeks ago, declaring that it would be “forever” Russian.

Since early August, Ukraine has been advancing towards Kherson, and recently broke through Russian defensive lines to the city’s north.

Since then, however, it has been difficult to assess the progress of the assault as Ukraine has imposed a news embargo in the region.

The week prior, Western authorities were warned that Russia appeared to be in the closing stages of preparations for a withdrawal disguised as a civilian evacuation.

They stated that the’reinforcements’ being sent to the area were actually conscripts covering the retreating regular forces.

The officials stated that Russia’s commanders determined the city was “not worth defending” and would attempt to survive the winter by constructing a strong defensive line on the opposite side of the river.

However, briefings from Kyiv have muddied the waters by suggesting that Russia is actually attempting to lead its men into a trap.

On Monday, the Ukrainian generals’ staff reported that Russian forces were disguising themselves as civilians and hiding in homes in preparation for urban battle.

They said that the city’s defenses had been bolstered and Putin’s forces appeared prepared to fight for the city.

Just hours earlier, Russia had reported that Kirill Stremousov, the deputy leader of Putin’s puppet administration in the region, had perished in a “car accident.”

Ukrainian troops are depicted on patrol near the Kherson frontline just before the Russian withdrawal announcement from the city.

Vladimir Putin is photographed meeting with the head of the Medical-Biological Agency as his military withdrawal from Kherson is announced.

A Ukrainian soldier inspects a former Russian trench in Kherson Oblast, close to the front line, after Putin’s forces began surrendering their positions.

The 45-year-old was instrumental in organizing and promoting the referendum on the unlawful annexation of Kherson by Russia.

As Ukrainian forces pushed towards the Dnipro River, he had recently evacuated residents from the west bank of Kherson.

Stremousov, who was appointed two months following the invasion of Ukraine, was wanted for treason in Kiev.

A Ukrainian lawmaker responded to Stremousov’s murder by labeling him a traitor.

Others hypothesized that his death had been staged to get him out of the city and away from advancing Ukrainian forces.

While Putin’s army’s withdrawal from Kherson represents its greatest setback to date, it is hardly the first it has suffered.

In April, his troops were forced to flee after a disastrous attempt to seize the Ukrainian capital resulted in the destruction of some of his strongest divisions.

This was followed by an offensive in the Donbas that had virtually ceased by the end of July.

The Ukraine then assumed the initiative and launched a counteroffensive against Kherson, having destroyed the majority of the city’s important supply bridges.

Shortly before the announcement, it was reported that 45-year-old Kirill Stremousov, the deputy chairman of the Kherson occupation administration, perished in a car accident.

Early in September, out of the city of Kharkiv, a second surprise offensive was conducted farther to the north that routed Russian forces.

In just a few days, nearly the entire region was returned to Ukrainian authority.

In October, Ukrainian forces broke through to the north of Kherson, forcing Russian troops back to their second line of defense.

Now, in November, Russia appears to have completely abandoned Kherson.

Kyiv now seeks to retake all of its occupied territory, including regions it has not governed since 2014.

Kherson is an important stop along the route to Crimea, the crown jewel of Putin’s 2014 conflict, and the place where President Zelensky has predicted the current battle will ‘end’.

While it is not anticipated that Ukraine’s armed forces will immediately launch an assault over the Dnieper River – at least not quickly – its HIMARS rockets will be able to reach Crimean strongholds.

Securing the entirety of the west bank of the river will also enable Kiev to free up units for additional attacks, maybe from Zaporizhzhia southwards into Melitopol and then eastwards towards Crimea.