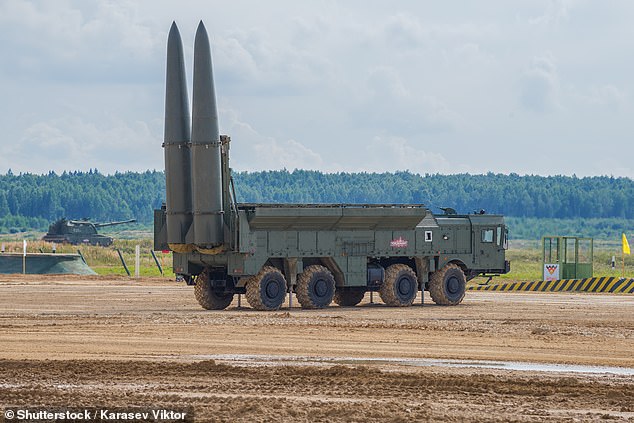 Russia has simulated nuclear-capable missile launches from an enclave of land in mainland Europe, amid mounting fears that Putin will hit the button if the situation in Ukraine continues to go against him.

The Kaliningrad war exercises, which are taking place between Poland and Lithuania on the Baltic Sea, included ‘electronic launches’ of Iskander ballistic missiles, according to Moscow’s defense ministry.

Before manoeuvring to escape a retaliatory strike, Iskander personnel practiced targeting targets such as enemy missile systems, airfields, infrastructure, and military command posts, according to the ministry.

There were no actual missiles fired during the drills.

More than 100 soldiers participated in the drills, which included rehearsing what to do in the event of a nuclear or chemical attack.

Belarus, which backed Putin’s invasion by enabling Russian forces to attack from its soil, held its own war games at the same time.

The’surprise’ practice was revealed by Minsk on Wednesday to test the army’s response skills, according to the defence ministry, while claiming that it presented no threat to its neighbors.

Belarusian military forces were putting their ability to “go on alert, relocate to preset zones, and conduct combat training” to the test, according to the ministry.

“The goal is to assess troop readiness and ability to respond quickly to a potential crisis,” the statement said, describing the exercises as a “surprise” exercise.

It released images of columns of vehicles, including tanks, going down roadways.

Kyiv, which has repeatedly accused Belarus of plotting to send troops into Ukraine to aid Russia’s military effort against its pro-Western neighbor, will be keeping a careful eye on the drill.

A senior Ukrainian official stated that if Belarus attacks, Ukraine will be ready to respond.

However, British intelligence claimed early Thursday that such a scenario was improbable, claiming that the drill was “in accordance with seasonal averages.”

Russia will most likely exaggerate the threat posed by these drills in order to weaken Ukrainian forces in the north,’ according to the Ministry of Defense.

‘However, deviations from usual exercise activities that could represent a threat to regional friends and partners are not expected.’