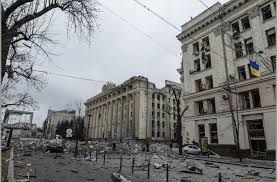 Russia Abandoning Kharkiv, an Important Moment
Latest assessment of the conflict, the respected military analysts say Russia was prevented from encircling Ukraine’s second city – and has now given up on attempts to do so. All things being equal, Ukraine has “likely won the battle of Kharkiv” – according to the Institute for the Study of War.

Kharkiv, in the north east, is sometimes called a “fortress city.” In this war, it has earned that name.
Since the start of the invasion, capturing it has been a key strategic aim of Russian forces.

But more than two months in, not only have they failed to do so – but according to the US-based think tank – they have abandoned the attempt all together.

Ukrainian troops are believed to have pushed them back to the international border, with claims their proxy forces – those from the self-proclaimed Donetsk and Luhansk “people’s republics” – are being delayed from entering Russia.
But, this does not appear to be a full-blown retreat – as was seen around the capital Kyiv.

An important moment in the war, rather than a turning point.
The latest agency reports lend some credence to the claim, with a spokesman for the Ukrainian General Staff quoted by AFP as saying that in the region, the “enemy’s main efforts are focused on ensuring the withdrawal of its units from the city of Kharkiv.”

Meanwhile, Reuters journalists say the north-eastern city has been quiet for about two weeks.
Moscow is still reported to be bombarding nearby areas, however – including Dergachi, some 10km north of Kharkiv – and late on Friday, reports in the Russian media said Russian forces had hit an arms depot in the region.
Capturing Kharkiv was a key Russian objective, and city was heavily shelled during the invasion, leading to hundreds of civilians being killed. In his latest video address, President Volodymyr Zelensky said “Ukraine’s forces were doing everything possible to liberate the country.”