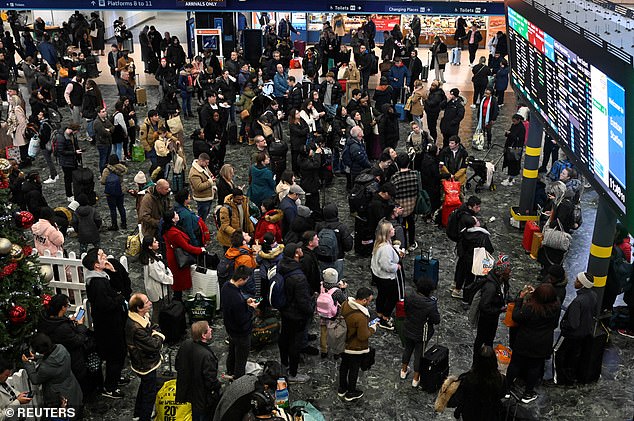 Passengers who intend to ride trains this morning have been informed that services are scheduled to begin later than usual after the conclusion of rail worker strikes.

Those wishing to use rail services have been advised to avoid travel for two weeks as the industry collapses under the weight of a strike.

This morning at 6 a.m., the RMT union terminated their most recent strike over a pay and conditions dispute, meaning that many trains will not begin operating normally until 9 a.m. or later.

People planning to travel by rail have been encouraged to double-check their itinerary, despite the fact that 70 percent of services will be operating today and 90 percent in the coming days.

Between January 3 and 7, about 40,000 employees of Network Rail and 14 train operating firms will again go on strike.

Today, normal rail service resumes, however travelers who want to utilize trains in the morning may experience delays (Pictured: Euston on Christmas Eve)

Anyone wishing to use train services has been advised to avoid travel for the next two weeks due to widespread industrial unrest.

A Network Rail representative told the BBC, “Staff are returning to work, so passenger services will begin significantly later.”

Passengers should verify before they depart so that they do not arrive at a station to find no trains.

ScotRail warned of delays throughout the whole day. A spokeswoman stated, ‘Services will begin later than usual on routes across the country due to signal boxes opening at different times following strike action.

There is still a prohibition on overtime for RMT members, and it seems likely that services will be canceled.

The consistency of services will improve over the following few days until the next round of strikes begins, at which point just 20% of usual services will be operating.

The M25 in Surrey, near Cobham, became congested as people rushed to Boxing Day sales.

In recent days, drivers have encountered gridlock on the highways as a result of the railway workers’ strike, which drove hundreds to abandon public transportation.

A Network Rail representative stated, “Rail customers who use the West Coast mainline from London Euston to Carlisle and rail routes in the West midlands [the northwest], Merseyside, and Cumbria are urged not to travel by train between December 24 and January 8 unless absolutely necessary.”

Yesterday at 9 p.m., members of the Transport Salaried Staffs’ Association (TSSA) who work on Crossrail began a new strike, which has affected services throughout the United Kingdom.

TSSA organizing director Nadine Rae stated, “Make no mistake, we will see trains come to a halt if rail bosses and the government do not do the right thing for our members and our beautiful rail network, upon which so many people rely.”

The Rail, Maritime, and Transport (RMT) Union shut down the rail network this week, causing portions of the country to experience 15mph crawling gridlock.

Hundreds of rail routes were unavailable, and additional delays are predicted today morning, with many services departing later than usual.

The AA had predicted significant traffic yesterday, as 15.2 million people were expected to commute after spending Christmas with relatives.

Travelers at London’s Euston train station on Friday, the beginning of the Christmas holiday,

However, traffic congestion on the M6 and M1 as well as the A303 was significantly worse than anticipated.

Boxing Day purchases and Premier League matches further contributed to the agony as tens of thousands of people traveled across the country.

Thousands of travellers were affected by yesterday’s rail shutdown, which also resulted in the cancellation of Eurostar services. Yesterday, National Express saw a record number of passengers board its coaches.

Last night, Paul Charles of the travel consulting firm The PC Agency told unions that by continuing to strike, they would be doing themselves “no favors.”

He stated, “It’s evident that the public’s support for the railroad workers is waning as a result of their persistent strike actions.” They’ve done themselves no favors by asking for strikes in the new year, when so many people will be in need of employment.

Boxing Day was further complicated by a string of collisions on major roadways.

According to traffic tracking provider Inrix, there were two collisions on the M25, the second of which caused 13-mile-long traffic jams.

In the afternoon, Wigan’s M6 was closed following a collision involving 12 vehicles.

On Friday afternoon, there were long lines on the A13 heading north from London.

The AA reported that by lunchtime, the condition of the highways was dreadful. It has been more difficult than anticipated, with significant delays.

National Highways asserted yesterday that its network of major roads were “functioning well” with the exception of accident-prone locations.

Andrew Haines, the chief executive of Network Rail, stated, “The RMT is bringing needless suffering to its own members, the railway, and the national economy.”

“I am so sorry that our passengers are bearing the brunt of the RMT’s unnecessary strike when a decent offer is on the table and just one-third of the workforce has rejected it.”

The Daily Mail was unable to obtain a response from the RMT. However, its general secretary Mick Lynch earlier stated, “Our campaign will continue until the government provides the rail industry a mandate to reach a deal on job security, compensation, and working conditions.”

»RMT Christmas strike ends today, but disruptions are likely until the new year«