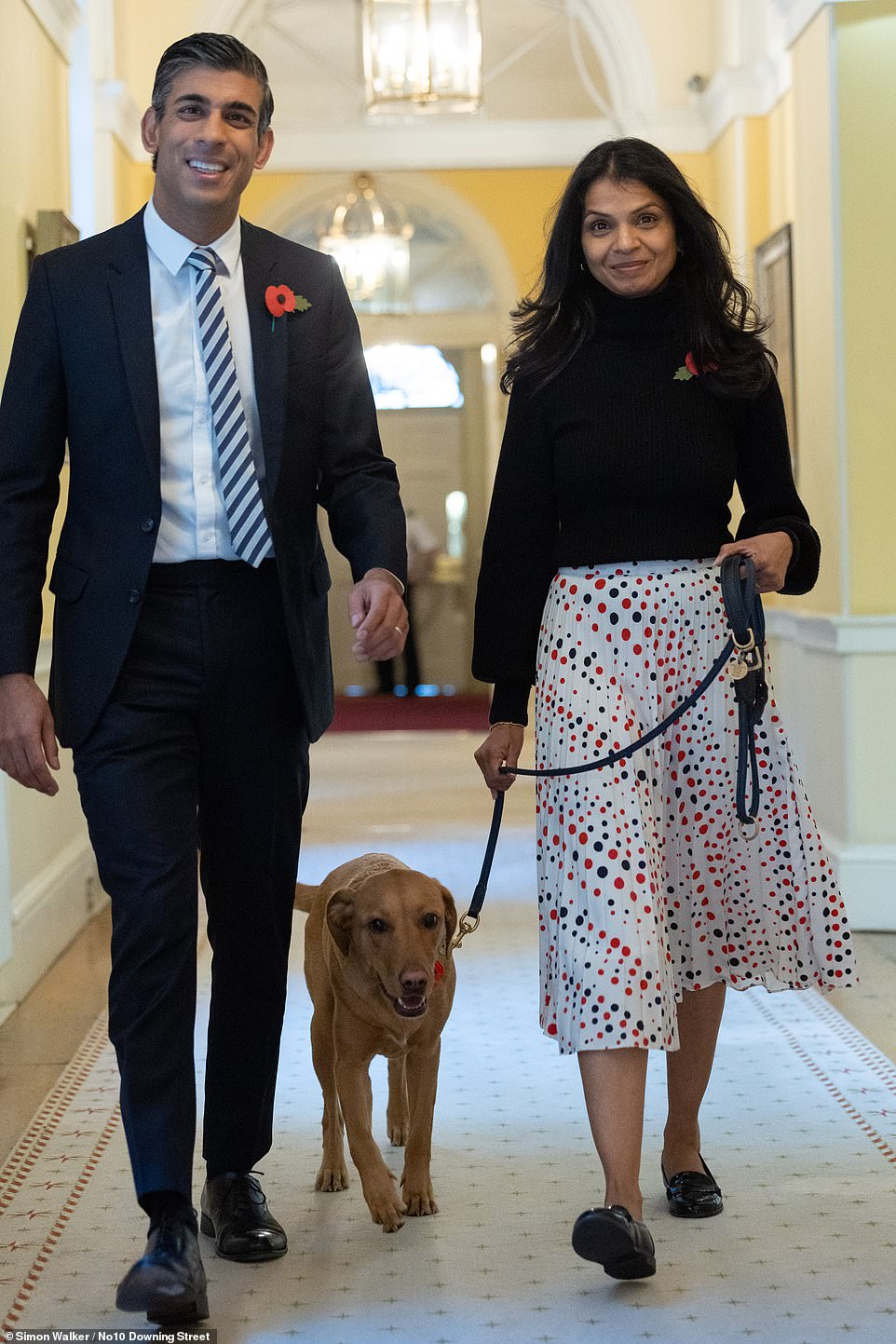 After purchasing poppies from Royal British Legion personnel, Prime Minister Rishi Sunak was seen today with his wife Akshata Murty and their labrador retriever Nova strolling along the corridor of No. 10 Downing Street.

The Sunaks, who are reportedly worth £730 million, were positioned on each side of fox red Nova, who was wearing a poppy around her neck, while Mr. Sunak asked people to make donations in honor of both past and current warriors as Remembrance Day draws near.

Earlier today, after trying for a moment to insert a £20 bill into a Poppy Appeal collection can, Mr. Sunak placed a poppy on his wife’s sweater before she did the same.

The PM then gave Nova a reward after placing a purple collar with a poppy around his neck.

As she starts life in the fast lane under the leadership of Britain’s first non-white Prime Minister, Nova might achieve new heights of renown.

The fox red dog, however, will be used to a fast-paced existence as labrador retrievers are renowned for their active and lively nature.

Additionally, Nova is making a comeback to the spotlight after residing next door at No. 11 Downing Street when its owner was the Chancellor during Boris Johnson’s administration.

In June of last year, the then-chancellor shared a sweet photo of the duo together along with the remark, “Meet Nova,” to mark the first time the family had gained a new member.

Mr. Sunak could be seen peering directly down the camera at Nova, who was perched properly on his lap.

The puppy was eight weeks old at the time, therefore Nova is now estimated to be 17 months old.

According to reports, Mr. Sunak was hesitant to add a dog to the family, but when his two daughters, Krisna and Anoushka, saw Boris Johnson’s dog Dilyn, they asked their father for a new puppy.

The labrador dog entered the home when the PM ultimately gave in.

Rishi was resisting it but eventually caved in, and now the whole building is fawning over her, a Downing Street insider recalled telling The Sun at the time.

The No. 10 pet was also known to take naps in the previous Chancellor’s infamous red Budget box and is said to like roast chicken.

Nova, who made an appearance on Mr. Sunak’s Instagram profile today, was often seen there, notably while the current PM was getting ready for the 2021 Budget.

Mr. Sunak shared a picture of himself carefully studying a piece of paper, with Nova sprawled on the couch in the background.

The British people will benefit from a stronger economy thanks to tomorrow’s Budget and Spending Review. The caption said, “I hope you find it more interesting than Nova did.

To replace Larry the Cat as the dominant animal on Downing Street, Nova will face strong competition.

The previous six months saw Larry’s renown soar as a result of his appearances under three different prime ministers and many cabinet reshuffles.

He has been a mainstay of Downing Street for some ten years now and is referred to as “The Chief Mouser.”

When Mr. Sunak was appointed PM, the parody Twitter account—which is notorious for its ironic Tweets—joked, “Rishi Sunak is becoming prime minister.” Since his family is wealthy, I will be eating caviar and lobster starting tomorrow.

»rishi Sunak walks with his dog«