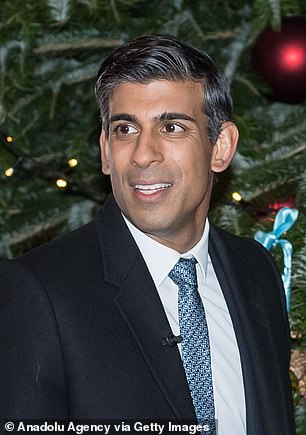 In order to manage the reaction to a wave of public sector strikes, Rishi Sunak established a “winter of discontent” unit in the center of the government.

The task force in charge of overseeing the strike has been assigned to the PM’s close supporter and Cabinet Office minister Oliver Dowden.

More than 10,000 ambulance employees joined the growing list of those in disagreements that the administration is battling to keep under control Friday night.

As they want salary increases to keep pace with the rate of inflation and improved terms and conditions, unions have threatened to coordinate strikes to have the “greatest effect” in the weeks leading up to Christmas.

The Financial Times said that the task group was established amid mounting worries about what would happen to the government if strikes caused the nation to become paralyzed.

When the ‘winter of discontent’ in the late 1970s erupted, a comparable surge of activity essentially overthrew the James Callaghan-led Labour government. Additionally, that came after a significant shock to global energy prices.

Employees in the rail, education, civil service, and NHS are among those who are either preparing dates or taking action.

The RMT has been criticized for organising a number of walkouts and destroying the vital pre-Christmas season for hospitality.

They decided to strike in protest of the government’s wage award of 4%, which was dubbed yet another “huge real-terms pay reduction.”

Discussions on potential strike dates before Christmas are scheduled to begin soon.

Future NHS strikes, according to GMB national secretary Andy Prendergast, are “a cry for assistance.” He hasn’t ruled out coordinating industrial action with other unions.

Mr. Prendergast responded to a question about whether GMB was thinking about coordinating strikes with other unions by saying, “We will be talking to other unions… we will be seeking to make sure that this has the most effect.”

Although we will make sure that crises are covered, the Government must eventually pay attention.

The Government must address the 135,000 open positions in the NHS and ensure that the general public is ultimately safeguarded if we are to see an improvement in the terms and conditions for our members.

He said, “This is a scream for assistance, and the Government ought to heed.”

“We need to see things happen very quickly because the British people deserves better and so do NHS members.”

Following a vote in favor of industrial action, thousands of 999 call handlers, ambulance technicians, paramedics, and their coworkers employed by ambulance services in the North East, North West, London, Yorkshire, and the South West will be called out on strike over pay and staffing levels, according to Unison’s announcement on Tuesday.

The choice to take action and forgo a day’s salary is always a difficult one, according to the union’s general secretary, Christina McAnea. It’s particularly difficult for individuals whose careers include providing care and saving lives.

However, thousands of ambulance workers and their NHS counterparts are aware that unless the Government takes action on salaries, delays and wait times won’t go down. They have made the painful choice to strike because of this.

Patients will always come first, and emergency coverage will be provided during any strike, but services and care will continue to deteriorate until NHS pay and staffing are corrected.

‘I’m very thankful for the hard work and devotion of NHS workers and genuinely sorry some will be taking strike action – which is in nobody’s best interests as we enter a severe winter,’ said Health and Social Care Secretary Steve Barclay.

Because of our current financial situation, unions’ demands are unaffordable; a 1% pay increase for every employee covered by the Agenda for Change contract would cost around £700 million annually.

“We’ve prioritized the NHS with record investment and accepted the recommendations of the independent pay review committee in full to offer over one million NHS staff a pay raise of at least £1,400 this year, with those on the lowest earnings getting an increase of up to 9.3%,” the statement reads.

“This is in addition to the 3% salary freeze for the public sector last year and other government assistance for rising costs.”

“Keeping patients safe during any strikes is our first concern. The NHS has tried-and-true strategies to reduce disruption and guarantee emergency services continue to run.

“My door remains open to talk with the unions about how we can improve the NHS as a place to work,” she said.