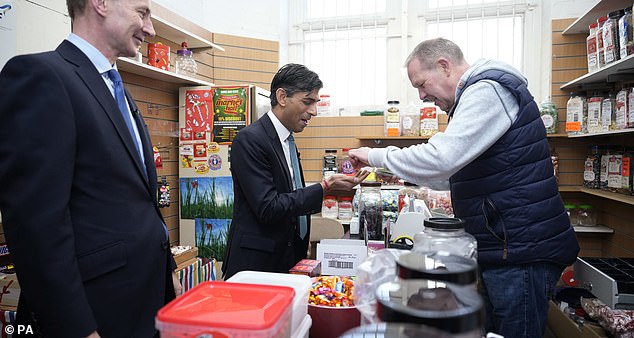 Today, Rishi Sunak defended his levelling-up fund in the face of criticism from Tory MPs in Red Wall constituencies who claimed the £2.1 billion cash pot favored the south east.

In response to concerns that areas that voted for the Conservatives for the first time in 2019 were being left out, the Prime Minister stated that today’s award announcements represent a leveling-out of resources.

Half of the successful bids are in the top 100 most impoverished regions in the United Kingdom. The wealthy Yorkshire constituency of the Prime Minister, Richmond, is receiving £19 million in financing. The Catterick Garrison, home to numerous British Army units, will use the funds to revitalize the town center.

One Tory representative told the Times, “People are apoplectic.” There are several extremely prosperous regions on the list. It looks terrible. It has failed miserably with red wall legislators.’

Mr. Sunak denied that the spending was an example of ‘pork barrel politics’, insisting that the north of England receives the highest funding per inhabitant.

During a visit to Accrington, when speaking to broadcasters, the Prime Minister stated, “The North has received the most funding per person.”

In response to concerns that areas that voted for the Conservatives for the first time in 2019 were being left out, the Prime Minister stated that today’s award announcements represent a leveling-out of resources.

The Eden Project North in Morecambe, which earned £50 million for a beachfront regeneration project in Lancashire, is one of the 80 projects designated for funding.

The wealthy Yorkshire constituency of the Prime Minister, Richmond, is receiving £19 million in financing. The Catterick Garrison, home to numerous British Army units, will use the funds to revitalize the town center. Today, PM was photographed in Accrington, Lancashire.

Sunak defends £19 million in funding for his constituency.

Rishi Sunak has justified the leveling-up money of £19 million that would be used to revitalize a main street in his affluent Richmond seat.

The funds will be used to refurbish the town core at Catterick Garrison, North Yorkshire, home to numerous British Army troops.

During a visit to Accrington, while speaking to broadcasters, the Prime Minister stated, “If you look at the whole investment in the levelling-up funds that we’ve done, around two-thirds of that funding has gone to the poorest region of our country.

Regarding Catterick Garrison, you should know that it is home to our largest army base and thousands of people who are frequently away from their own families while serving their country.

‘It is essential that they have access to a town center with the amenities they require — that is what this financing will provide.

I am extremely appreciative of all of our military forces members for the amazing work they do, and I am thrilled that this investment will help them.

This is why we’re here speaking with you in Accrington market; these are the areas receiving support.

This is an example of leveling up in action, as we are keeping our word and investing in local communities.

The Eden Project North in Morecambe, which earned £50 million for a beachfront regeneration project in Lancashire, is one of the 80 projects designated for funding.

The Cardiff Crossrail project was also granted £50 million, while a new ferry for Fair Isle in the Shetlands would receive about £27 million, according to the department.

As the Prime Minister promised to “build an optimistic future,” the Department for Levelling Up promised that the most recent round of levelling up funds would offer much-needed economic growth and new jobs to communities across the nation.

However, Labour accused the government of presiding over a “Hunger Games-style competition that pits communities against one another.”

The government stated that £2.1 billion in financing would be allocated as follows: £672 million for the improvement of transportation links, £821 million for community development, and £594 million for the restoration of local heritage assets.

Former British prime minister Boris Johnson pioneered the leveling up idea, promising to “level up” towns and communities across the country.

Michael Gove, the Secretary for Levelling Up, denied that the more prosperous South East receives more money for leveling up than areas in the North.

He stated on BBC Radio 4’s Today, “Well, that’s not entirely accurate.” When considering the amount of money allocated per person, the North West, the North East, and Wales perform the best.

Increasing funds in your region

Here is a regional distribution of funds for leveling up:

The £2.1 billion committed to projects is part of the £4.8 billion leveling up fund announced in 2020.

Together, London and the South East account for a quarter of the nation’s population.

Investing is necessary in certain regions of deprivation in London and the South East, particularly along the Kent coast.

He continued, ‘Leveling up is precisely about ensuring that communities who have suffered from lower productivity in the past, that have not received the economic attention that they should have, are given the means to produce investment and high-quality jobs.

The North of England, the Midlands, and areas of Scotland, Wales, and Northern Ireland have received a disproportionate amount of investment because of this.

The rehabilitation of Gateshead Quays and the Sage will receive £20 million, while £5.1 million has been allocated for the construction of new female changing facilities in twenty rugby clubs in Northern Ireland.

The grant announcement coincides with the debut of a new, online-accessible interactive map that will allow the public to know which projects in their area have won financing.

Lisa Nandy, the shadow secretary for leveling up, criticized the fund and accused the government of “extraordinary arrogance.”

“The Leveling Up Fund is in disarray, plagued by delays and allegations of favoritism,” declared the Labour front-bencher.

‘Extraordinary hubris is required for them to expect us to be grateful for a partial repayment on the money they have stolen from our communities, which has decimated important local services like as child care, public transportation, and social services.