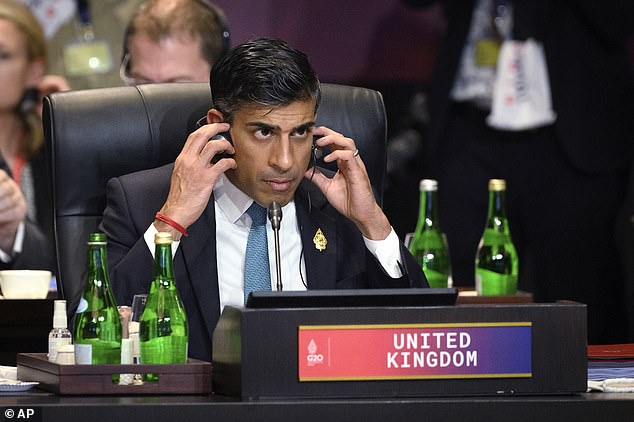 Overnight, at the G20 conference, Rishi Sunak accosted Russian foreign minister Sergei Lavrov, asking him to “get out of Ukraine and end this barbarous conflict.”

In the first face-to-face meeting between a British Prime Minister and a top Russian official since the start of the war, Mr. Sunak stated that the “Putin regime” had transformed Russia into a “pariah state” and that the United Kingdom will continue to support Ukraine “for as long as it takes.”

Vladimir Putin’s decision not to attend the summit in person was “notable,” according to Mr. Sunak, who added: “Countries should not invade their neighbors, they should not assault [civilians], and they should not threaten nuclear escalation.”

In a remote speech to the G20 and Mr. Lavrov, the President of Ukraine, Volodymyr Zelensky, stated that it is time to end the war, but that peace cannot be accomplished until Russian soldiers withdraw from all occupied territory.

Mr. Lavrov attended the summit in place of Vladimir Putin, who said he was “too busy” to address the international community as his invasion of Ukraine worsens.

Mr. Sunak faced Lavrov across a conference table, marking the first time since the start of the war that a British Prime Minister and senior Russian leader have met face-to-face.

Zelensky stated that Kyiv will not sacrifice its sovereignty, territory, or independence in exchange for peace. He also demanded the release of all Ukrainian prisoners.

“I am certain that now is the moment to halt the Russian destructive war,” he said via video link to the summit on the island of Bali, according to a copy of his address obtained by Reuters for review.

He demanded that all Russian forces be withdrawn from Ukraine and reaffirmed Ukraine’s territorial integrity, stating that Kyiv will not compromise its sovereignty, territory, or independence. He also demanded the release of all Ukrainian detainees.

Please choose your leadership path, and we will implement the peace formula together, he urged.

On the eve of the G20 conference, the two leaders “emphasized their opposition to the use or threat of use of nuclear weapons in Ukraine,” according to a White House summary of their discussion in Indonesia.

According to China’s Foreign Minister Wang Yi, who attended the discussion, Xi told Biden, “Nuclear weapons should not be utilized and nuclear conflicts should not be fought.”

Putin’s repeated assertions that Russia could use nuclear weapons to maintain its territorial integrity have been regarded in the West as an implied threat to use them over Ukrainian territory Moscow claims to have annexed.

Due to their mutual mistrust of the West, Xi and Putin have grown closer in recent years, and China has refrained from publicly criticizing Russia for the incursion.

Zelenskiy applauded Monday’s statements, stating in a late Monday address, ‘Everyone knows to whom these words are directed.’

A senior U.S. official stated that the United States expects the G20 to criticize Russia’s war in Ukraine and its impact on the global economy.

Since Russia is a member of the group, consensus on Ukraine is improbable, and the official declined to specify the nature of the censure.

Rishi Sunak, speaking in Bali, stated that Putin’s regime will hear the chorus of worldwide resistance to its actions.

He remarked, “Russia’s actions put us all at risk.”

Putin is too busy to attend the conference, according to Russia.

Moscow claims to be conducting a “special military operation” in Ukraine to eliminate nationalists and safeguard Russian-speaking communities. Ukraine and the West characterize the acts of the Kremlin as an unjustified act of aggression.

Ukraine has stated numerous times that it is prepared for peace, but would not cede land.

Commander-in-Chief Valery Zaluzhny posted on Telegram late Monday night, following a telephone call with the chairman of the U.S. Joint Chiefs of Staff, Mark Milley: “Ukrainian servicemen accept no talks, no agreements, and no compromise judgments.”

Kherson city was the sole regional capital conquered by Russia since the February invasion, and Putin declared it “forever Russian” six weeks ago.

Olga Fedorova, an English teacher in Kherson during the occupation, explained that the scarcity of electricity and mobile internet meant that many were uninformed of events until November 11, when Ukrainian troops raised their flag in the main square.

She stated, “We couldn’t believe, and still can’t believe, that our Ukrainian army is here.” We had been awaiting their arrival for the past eight and a half months.

Residents of and near Kherson who were questioned by Reuters since Friday have reported murders and kidnappings.

In the village of Blahodatne, north of Kherson, Reuters received one story of a neighbor being shot and three reports of individuals being abducted by forces.

It was impossible to independently verify the accounts.

Russia denies that its troops in Ukraine have targeted people or committed atrocities. In other formerly Russian-occupied regions, mass graves containing tortured civilians have been discovered.

Monday, 94 of the 194 members of the United Nations General Assembly voted in favor of a nonbinding resolution recognizing that Russia is accountable for making reparations to Ukraine.