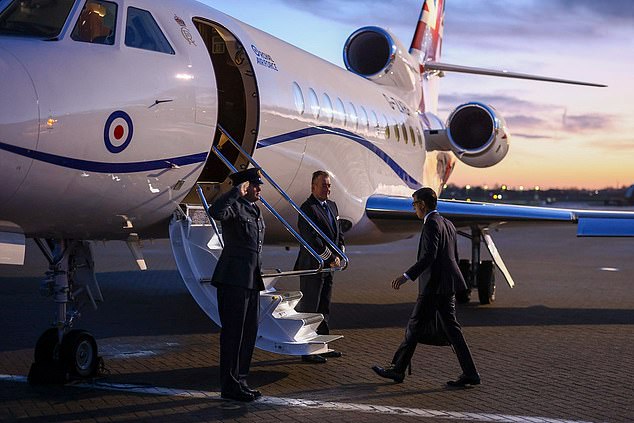 Today, Rishi Sunak was accused of behaving like a “A-List celebrity” because he allegedly used the Royal Air Force to fly 250 miles to northern England to promote government assistance for disadvantaged communities.

This morning, a VIP-reserved air force jet flew from RAF Northolt in north-west London to Blackpool, the closest airport to Morecambe, where the prime minister is set to address later.

No. 10 refuses to divulge his travel intentions because to security concerns; if confirmed, it would be his third usage of an RAF aircraft in the past 10 days to go to regions of the United Kingdom with mainline rail connections to London.

Last week, he travelled to Edinburgh to meet with Nicola Sturgeon then to Leeds to visit an NHS unit for photo ops.

Today’s 41-minute trip would allow him to escape the Abellio West Coast Mainline train service, which has been heavily criticized in recent months for its poor performance and unreliability. A train departing Euston at 8.30 a.m. would get him to Morecambe at 10:25 a.m. assuming it ran on schedule.

At a time when regular families are under financial strain due to escalating expenses, Labour targeted the cost of flights.

This morning, a VIP-reserved air force jet flew from RAF Northolt in north-west London to Blackpool, the closest airport to Morecambe, where the prime minister is set to address later.

A Labour spokeswoman stated, “Rishi Sunak is no longer attempting to conceal his extravagant spending habits.

It is ludicrous for an A-list celebrity to jet around the country on taxpayers’ dime instead of taking the train, like the rest of us do.

Only Cabinet members and ministers in charge of ministries have the power to authorize special flights for themselves or other ministers within their departments.

“Non-scheduled flights may be authorized when a scheduled service is unavailable or when it is essential to travel by air but the requirements of official or parliamentary business or security considerations prevent the journey from being made via a scheduled flight.”

Today, Mr. Sunak’s government was put on the defensive as Tory MPs in Red Wall constituencies accused the £2.1 billion Levelling-Up fund of favoring wealthier communities in the south east.

Michael Gove argued that the pool of regeneration funding was “heavily tilted” toward the North in response to suggestions that communities that voted Conservative for the first time in 2019 were being overlooked.

However, only fifty percent of successful bids are in the top 100 most impoverished regions in Britain. The wealthy Yorkshire constituency of the Prime Minister, Richmond, is receiving £19 million in financing. The Catterick Garrison, home to numerous British Army units, will use the funds to revitalize the town center.

One Tory representative told the Times, “People are apoplectic.” There are several extremely prosperous regions on the list. It looks terrible. It has failed miserably with red wall legislators.’

But Mr. Gove, the Secretary for Levelling Up, maintained that the comparatively prosperous South East receives more money for leveling up than areas in the North.

He stated on BBC Radio 4’s Today, “Well, that’s not entirely accurate.” When considering the amount of money allocated per person, the North West, the North East, and Wales perform the best.

No10 has repeatedly defended the Prime Minister’s use of RAF aircraft instead of regular train services or his ministerial automobile, citing “significant time constraints”

A week ago, it published online images of him entering the 14-seater, French-made Envoy executive jet in front of a saluting serviceman before flying to Leeds.

He is the most recent minister to face questions regarding their use of official government aircraft for trips that could have been made using cheaper, albeit slower, modes of transportation.

She was observed exiting the airplane while donning a pilot’s helmet reminiscent of Top Gun. In order for the Home Secretary to “see the breadth of the coastline,” according to those close to her, the Border Force must continue to monitor the influx of migrants from across the Channel.

Dan O’Mahoney, the clandestine threat commander for the Border Force, reportedly pointed out to Mrs. Braverman sites where migrants’ tiny boats are brought ashore during the helicopter ride.