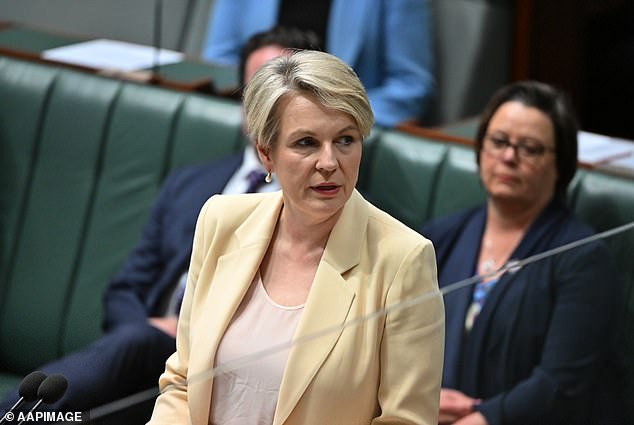 After destroying ancient Aboriginal rock shelters in Western Australia, the multibillion-dollar mining firm Rio Tinto has been likened to the Taliban.

To get access to higher-grade iron ore in Juukan Gorge in the Pilbara area, the mining giant detonated in May 2020 two shelters indicating human occupation dating back 46,000 years.

On November 24, 2022, Environment Minister Tanya Plibersek submits to Parliament House the government’s response to a report on the devastation of Juukan Gorge.

A report issued by an interim parliamentary committee in December 2020 concluded that Rio understood the worth of what they were destroying but nonetheless blew it up.

When the exquisite Buddhas were destroyed by the Taliban, there was a worldwide outcry, Environment Minister Tanya Plibersek said on Thursday as she introduced new legislation to prevent such tragedy from ever occurring again.

‘But no laws were broken. It is false. Thus, we are modifying it.’

Photos published by the PKKP Aboriginal Corporation depict Juukan Gorge in Western Australia on June 2, 2013 (top) and on May 15, 2020 (bottom), after Rio Tinto blew it up.

On November 24, 2022, Environment Minister Tanya Plibersek submits to Parliament House the government’s response to a report on the devastation of Juukan Gorge.

“It is inconceivable that any civilisation would willfully demolish Stonehenge or the Egyptian pyramids,” she told the lawmakers, “yet that is precisely what happened in Juukan Gorge.”

‘The devastation of Juukan Gorge is also important. However, this occurred because of the ineffectiveness of our legislation,’ she explained.

In order to conserve Australia’s cultural heritage, a parliamentary committee that investigated the devastation concluded that significant federal legislative reform is required.

Ms. Plibersek stated that the government had accepted seven out of eight committee recommendations and will work with the First Nations Heritage Protection Alliance to address the remaining one.

This paper explains how we arrived to that disgraceful juncture, as well as the larger tale of our nation’s inability to protect Indigenous cultural heritage.

“We recognize that we must do better. We are dedicated to achieving this goal in collaboration with Indigenous Australians.

Thursday on the ABC radio RN Breakfast show, Ms. Plibersek stated, ‘One of the very obvious conclusions of the two hearings into the destruction of the Juukan Gorge was that this was not an isolated incidence and there were fundamental inadequacies in our legislation safeguarding Aboriginal cultural assets.

Pat Dodson (pictured), a senator for the Labor Party, stated that Australia could hardly claim to protect the world’s longest living culture while providing simple methods for its destruction.

In actuality, the destruction of Juukan Gorge was permissible within the current legal framework, despite the fact that it was morally reprehensible and demonstrates the weakness of the laws.

She continued, “Juukan Gorge was undoubtedly the most prominent example of cultural heritage conservation, but it was by no means unique.”

“We are extremely lucky in Australia, considering that children growing up in Egypt are unaware of the pyramids.”

‘It’s inconceivable, but our cultural past here in Australia is tens of thousands of years older…’ And I believe we need to rectify that by valuing it appropriately.’

Photos published by the PKKP Aboriginal Corporation depict Juukan Gorge in Western Australia on June 2, 2013 (top) and on May 15, 2020 (bottom), after Rio Tinto blew it up.

Pat Dodson, a senator for the WA Labor Party, stated that Australia could not claim to respect the world’s longest surviving culture if it had simple methods for destroying its fabric.

Mr. Dodson, an Indigenous person, stated, “(If) you continue to do this, you’ll be on the way to erasing all traces of the lives and histories of people in this country”

Ms. Plibersek stated that the research made it very evident that the system to safeguard cultural assets was ineffective, but that improvements were not intended to halt progress but rather to solve “our oldest imbalance.”

She stated, “We are always a better nation – more cohesive, more confident, and more comfortable in ourselves – when we offer everyone a seat at the table and listen to all opinions.”

However, the traditional proprietors of the demolished Juukan Gorge rock shelters feel insulted and marginalized by the formal response of the federal government.

Chairman Burchell Hayes stated that Ms. Plibersek’s office emailed the PKKP Aboriginal Corporation on Tuesday to inform them of the upcoming announcement.

According to him, guards were irritated and dissatisfied with the lack of information and serious follow-up.

Mr. Hayes stated in a statement, “It appears a media event in Canberra is more important than giving PKKP people the courtesy of asking us what can be done to try and prevent anything like the demolition of the Juukan rock shelters from happening again.”

We anticipated that the minister would want to meet with us before making a public statement about our nation and cultural heritage.

Ms. Plibersek’s office stated that the minister had repeatedly sought to communicate with the PKKP this week.

A spokeswoman stated that a meeting between the CEO and the minister was also offered.

Pat Dodson (pictured), a senator for the Labor Party, stated that Australia could hardly claim to support the world’s longest living civilization while allowing for the destruction of its cultural fabric.

Rio had the legal right to demolish the Juukan caverns under the outmoded WA Aboriginal Heritage Act, which has since been updated by current state legislation.

Pat Conaghan, spokesperson for the opposition, stated that the problems presented by the study need serious examination.

He stated, “They brought into sharp view the broader need for the modernization of Indigenous heritage protection legislation in Australia.”

However, the Nationals member of parliament stated that any effort to amend cultural heritage law should not “demonize” the resources industry or pose “unacceptable dangers to rational, sustainable economic growth across Australia.”

In March of 2021, the then-chairman of Rio Tinto admitted personal responsibility for the destruction of the historic, sacred Indigenous place.

In a business statement, Simon Thompson announced his intention to resign from Rio’s board and not run for re-election in 2022, stating, “I am ultimately responsible for the failures that led to this awful catastrophe.”

Environment Minister Tanya Plibersek has presented the federal government’s response to the conclusions of a parliamentary committee about the loss of First Nations historic sites in Western Australia’s Juukan Gorge.

The intermediate and final reports followed Rio Tinto’s May 2020 demolition of the 46,000-year-old Juukan caverns.

Among the proposals were the implementation of international agreements, legislative and policy reform, the improvement of systems and procedures, and the prohibition of restrictions on the ability of traditional owners to seek cultural asset protections.

In addition, they address wider issues of cultural heritage law and policy.

The government accepted seven out of the eight suggestions.

The government acknowledged that deterioration and destruction to Australia’s cultural heritage assets have persisted since colonization.

In accordance with the United Nations Declaration on the Rights of Indigenous Peoples, the National Agreement on Closing the Gap, and the Uluru Statement from the Heart, reforms will be implemented.

In establishing changes, the government will balance the requirement for business and industrial growth certainty with the significance of cultural heritage to First Nations peoples and all Australians.

A contract has been inked with the First Nations Heritage Protection Alliance to ensure that indigenous perspectives are heard throughout the whole legislation reform process.

With the assistance of the alliance, a proposal will be developed to give the minister for indigenous affairs rather than the minister for the environment the ultimate responsibility for cultural heritage protection.

When state or territory protections are insufficient, the federal government will also consider enhancing protections for First Nations people.

When it comes to cultural heritage legislation reform, the administration pledges to place revealing the truth at the center of its relationship with Indigenous people.