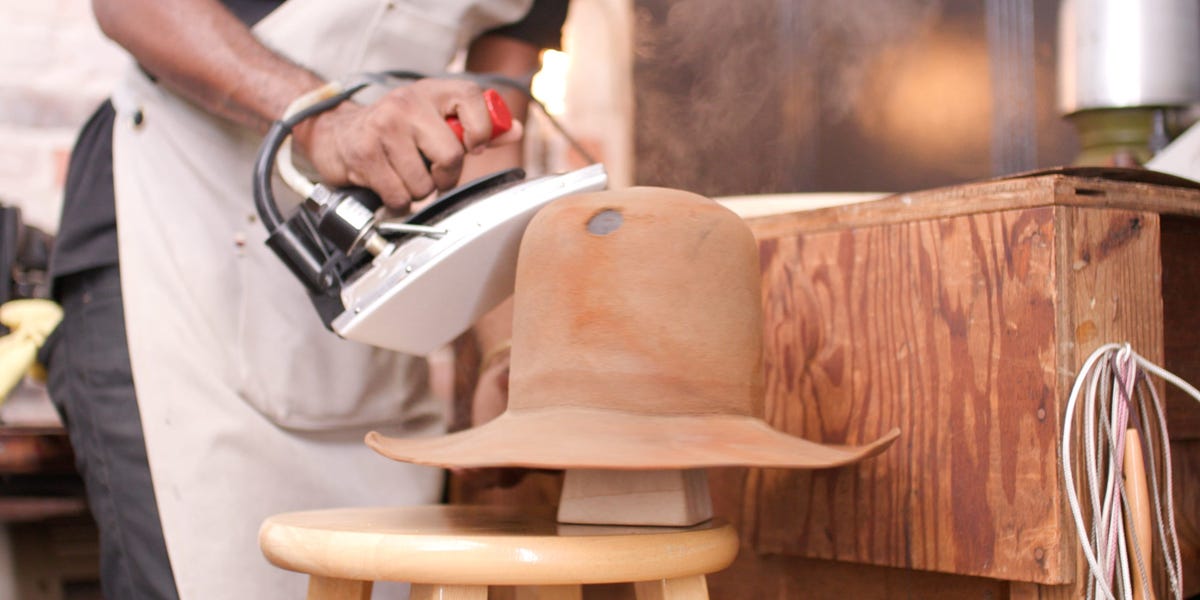 Eldrick: My name is Jacobs Eldrick. I’ve been constructing and repairing hats for over three years. Today, I will restore a hat that is more than seventy years old while preserving its individuality.

I’ll begin by disassembling the headgear. We use a seam ripper, followed by scissors. The felt is in excellent condition, but we must be very careful not to poke any holes into it or rip anything that does not need to be ripped. This hat belonged to the grandfather of my client. And when he passed away, he left it to his father. The character and patina of the hat and the hole will be preserved. The client desires to maintain continuity from generation to generation by retaining the hole. The hat has a history, which he want to share while wearing it.

Following this, I will clean the felt. I use a small amount of alcohol and a small amount of water. Then, we use a hat brush to remove any dirt that may be present on the felt’s surface. Therefore, alcohol has two effects. It dissolves a little amount of the bioresin contained within the felt, rendering it more malleable and manageable, and then eliminates any germs and mold that may be present on the felt’s surface. Then, we use the sponge to penetrate the felt a bit farther.

For the hat band, we spray it with alcohol a second time; this allows me to go over it with another sponge to remove any loose threads and thoroughly clean the hat band. We exert significant effort to preserve its original condition. We want it to retain the character it has acquired over the years, much like the felt. Following this, we use snippers to cut any loose threads.

Then, we concentrate on reblocking the felt. The most critical aspect of remaking a hat is reblocking. The felt is then stretched over a block after being heated with steam. We are selecting a block that will provide us with the head circumference of the client. What we’re doing here is establishing the fundamental shape of the hat, known as an open crown. Then, once it is stretched over the block, we will grab a hatter’s knot and a pusher downer, which is the instrument used to secure the knot to the base of the hat block. Here is where the 90-degree break angle between the crown and the felt is created. If the felt itself was beginning to degrade, particularly around the break line, the hat would be irreparable. This would be problematic for reblocking the headgear.

I’m using a brim cutter, which allows us to determine the width and length of the brim. This brim must be shortened by half an inch. We are ensuring that the hat nicely frames my client’s face while maintaining the general form.

Then, I’ll use sandpaper with a fine grain to really smooth the edge. In the process of brim-cutting, you don’t always achieve the smoothest edge, so we use sandpaper to create truly sharp edges on the hats.

Lastly, we will construct a sweatband. We are unable to reuse the old sweatband. All that remains is the reed. Therefore, we must replace the sweatband with a new leather component. The sweatband is essential for preserving the integrity of the hat. It holds the hat together quite well. In addition, it provides a barrier between the wearer’s forehead and the felt itself. Hatmakers are capable of many things, but removing perspiration from felt is a particularly difficult task.

And finally, the crown of the hat is shaped. We use steam once more. The steam enables the felt fibers to expand significantly. Individual fur fibers and bioresin are the two material components that comprise the felt. Without bioresin, felt would be extremely flimsy and lacking in structure. In order to achieve the correct form, we are truly expanding and softening the material.

I’m ecstatic about this specific repair, and I believe my customer will be ecstatic to have a hat that looks and feels like his grandfather’s hat and also has the patina and character of a hat that’s over seventy years old. The only reason this hat would need to be returned to our store is if it requires maintenance, specifically on the sweatband. This hat will often last as long as my client desires to wear it.