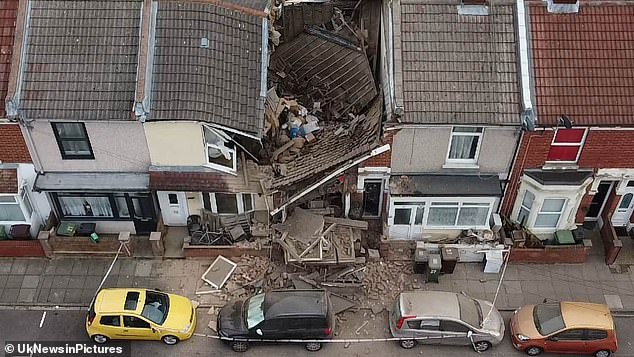 Residents of a terraced house miraculously fled Wednesday morning as it fell.

Just after 8:30 a.m., firefighters responded to the property on Langford Road in Portsmouth after receiving reports that the roof had collapsed.

Two patients were treated and transported to the hospital by paramedics.

According to the Hampshire and Isle of Wight Fire and Rescue Service, many homes on the street were evacuated.

Wednesday morning aerial imagery shows the fall of a house on Langford Road in Portsmouth.

After receiving indications that the roof of a house on Langford Road in Portsmouth had collapsed, firefighters went to the scene.

Two patients were treated by paramedics from South Central Ambulance Service before being transported to the hospital.

The route was closed and a cordon established.

A spokesperson for the fire department stated, “Firefighters were dispatched to Langford Road in Portsmouth at 08:30 this morning after a terraced home collapsed.”

A Southsea Fire Station team and a USAR adviser were there to examine the damage and secure the situation.

Wednesday around 8.30 a.m., an aerial photograph shows the fall of a building on Langford Road in Portsmouth

Several homes on the street were evacuated by Hampshire and Isle of Wight Fire and Rescue Service.

Several homes were evacuated and the road was closed while a cordon was established.

As utility providers tried to disconnect the electricity and gas supply, the event was turned over to the Hampshire Constabulary and Portsmouth City Council engineers.

At 11:08, HIWFRS returned to station in response to the stop message.

A Hampshire Police spokesperson stated, “We were dispatched to Langford Road at 8.30 a.m. in response to reports of a building collapse.”

We are assisting our colleagues at Portsmouth City Council with the road closure in order for them to evacuate nearby homes.