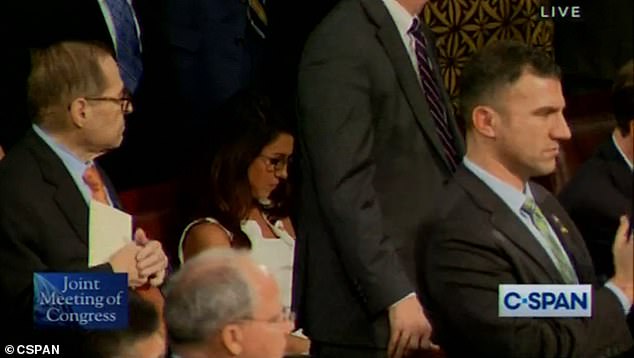 A video depicts the moment in which two Republicans declined to join the standing ovation for Zelensky following his passionate address before Congress and instead urged a probe into the £50 billion in aid already delivered to Ukraine to help it fight Putin.

Matt Gaetz and Lauren Boebert remained sitting during Volodymyr Zelensky’s address to Congress on Wednesday evening during his brief visit to Washington, DC.

Zelensky spoke for about a quarter-hour, praising Americans and requesting their continuing support in the future while stressing that his country is “alive and flourishing.”

The speech occurred at a time when the House and Senate are on the cusp of approving an additional $45 billion in aid – after providing $50 billion this year to assist in the battle with Russia.

Boebert and Gaetz did not clap or stand while using their mobile devices, and Gaetz appeared to smirk.

Zelensky stated that investments in Ukraine were “investments in global security and democracy” and that “the Russian dictator has lost control over us,” which was met with applause from both Republicans and Democrats.

Representatives even unfurled a Ukrainian flag on the House floor.

Boebert and Gaetz, however, did not stand and applaud while using their phones, and Gaetz even appeared to snicker.

Representatives from Colorado and Florida oppose more assistance to Ukraine and have sought a review of the $50 billion already sent to the country.

Boebert urged a ‘comprehensive probe’ of U.S. assistance to Ukraine and stated that she’really wished’ the funds would be used to ‘defend the southern border’

Zelensky spoke for about a quarter of an hour, praising Americans and requesting their continuing support in the future while stressing that his country is “alive and flourishing.”

She stated in a video: “The Ukrainian people are suffering.” The war is lethal and horrifying, and the slaughter has not yet ceased.

“Unfortunately, I did not hear a clear explanation of where the $50 billion we sent to support their work went tonight.

I will not support sending further funds to this conflict until Congress receives a complete audit of where our money has already been spent.

President Zelensky is working to safeguard his nation, its borders, and its citizens. I got it.

I truly hope our commander-in-chief would secure our southern border and defend our people at home as he does abroad.

Gaetz added that investing in Ukraine rather than the United States was the essence of “America Last.”

In a tweet, he stated, ‘President Zelenskyy should be commended for putting his country first, but American politicians who comply with his demands are unwilling to do the same for ours.

“America Last is defined by hemorrhaging billions of taxpayer cash to Ukraine when our country is in crisis.”

He did not sway my decision to withhold aid to Ukraine and investigate fraud in already-completed transfers.

According to the German research organization Kiel Institute for the World Economy, the Biden administration delivered approximately $50 billion in humanitarian, financial, and military assistance to Ukraine in 2022.