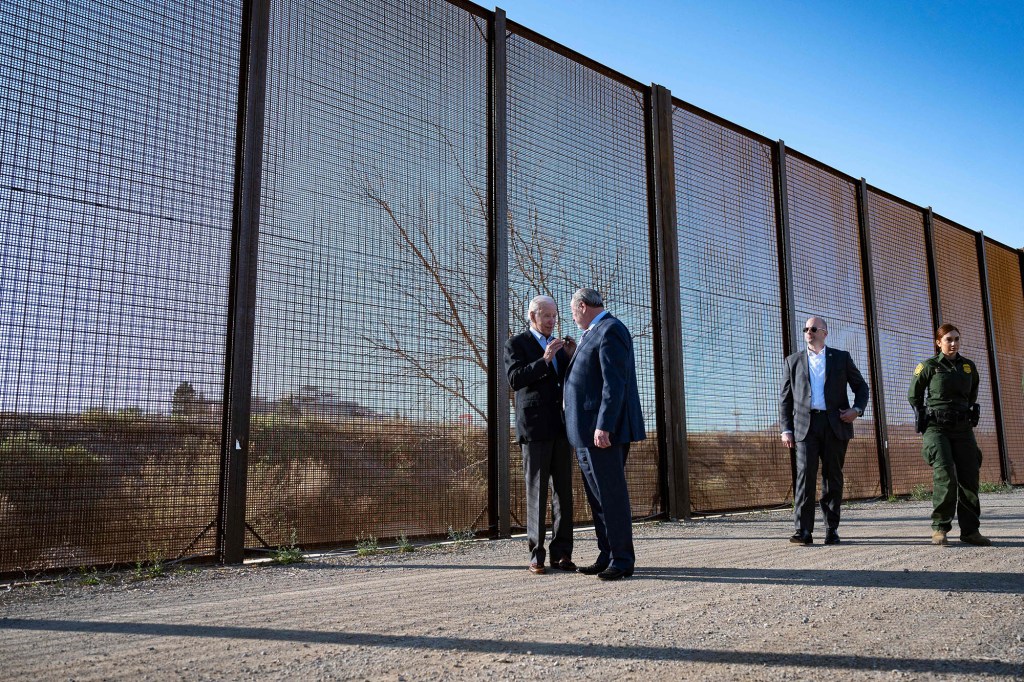 Republicans criticized President Biden’s roughly three-hour tour of the southern border on Sunday as a “box-checking exercise,” arguing that the visit was abysmally brief and omitted the areas where the immigration situation is most serious.

Biden landed in El Paso, Texas, his first visit to the southern border since becoming president nearly two years ago, before boarding Air Force One for a summit in Mexico City with the presidents of Mexico and Canada.

“Congratulations to President Biden, who, two years into his office, has finally figured out where the boundary is. Wouldn’t have anything to do with this week’s House Republican launch of our border oversight plans, would it?” Representative Dan Crenshaw (R-Texas) tweeted.

Texas Representative Chip Roy, a Republican colleague of Crenshaw’s, predicted that Biden’s visit will not result in significant measures to rectify the issue.

President Biden inspects a piece of the border wall outside El Paso, Texas, on Sunday.

“President Trump’s trip to El Paso is merely a box-checking exercise coupled with propaganda… “The administration refuses to stop the flood at our border and will do nothing to stop it,” tweeted Roy.

Crenshaw and Roy echoed the views conveyed in a letter Texas Republican Governor Greg Abbott personally gave to the president upon his arrival in El Paso on Sunday.

“Your visit to our southern border with Mexico today comes two years and $20 billion too late,” wrote Abbott. “On behalf of every American, I implore you to secure our border by enforcing the immigration laws passed by Congress.”

Cruz said in a statement, “If President Biden is serious about addressing the crisis his administration created, he must visit McAllen, Eagle Pass, Del Rio, and Laredo and talk to the communities ravaged by crime, the ranchers who find bodies on their land, the Border Patrol agents who are overwhelmed, and the families who have lost loved ones due to cross-border drug trafficking.”

Instead, he spent two years misleading the American public about the severity of the situation.

Since he entered the White House in January 2021 and began reversing many of the policies of former President Donald Trump’s administration, Biden has been constantly criticized on immigration policy, with some claiming that he has effectively extended a welcome mat to illegal immigrants.

“His tardy visit to the border is nothing more than an attempt to score political points,” he continued.

More than 2.3 million migrants were apprehended in fiscal year 2022 while attempting to cross the approximately 2,000-mile southern border with Mexico, according to US Customs and Border Protection numbers released in October.

In the first two months of fiscal year 2023, the number of arrests is on track to surpass 2.8 million.