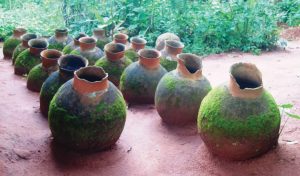 In Igboland, pottery making is a major item for home utilities and decorations.

However, with the advent of western civilization and new technologies, this cherished item seems to have been pushed literally into extinction.

For Mr Chijioke Amebe who sells clay and other art materials at Eke Awka Market, Awka, clay materials were used virtually by all ethnic groups before, but they can only get it now from Awgbu, Anambra State and Afikpo, in Ebonyi State, because of the scarcity of potters which have also made it very costly and blamed the dearth of pottery making on wrong perception held by different people about African traditional arts.

Mr Amebe said the only people who now use clay materials are film makers and those who use it as vase for flowers.

Another seller of clay at same market, Mrs Nnoye Eselu said though  technology has come up with preferable options, Africans can still find ways of improving on pottery making to make it more unique and acceptable.

Mr Emmanuel Okorie, while explaining the importance of the designs made on clay pots, said that circle lines or loops could be for medicinal or ritual purposes for people with spiritual problems.

He also added that people with chieftaincy tittle “Ozo” in Igboland were served food with specially made “oku” in the olden days.

For the clay materials which hitherto occupied very central position in Igbo culture and tradition, now serving only ceremonial purposes, is a pointer that another artifact which Ndịgbo are known for is going into extinction, as well as the identity of Ndịgbo, if urgent step is not taken.