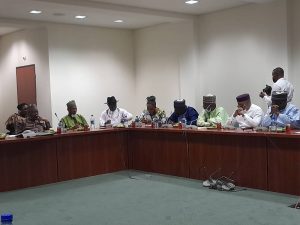 The Chairman, House of Representatives Committee on Customs and Excise, Honourable Leke Abijide, has asked lawmakers to engage their constituents on the need to stop car smuggling in Nigeria.

Speaking with officials of the Nigeria Customs Service in charge of Trade and Tariff; on the time and amount expended on Customs’ clearance and transfer of imported goods, Honourable Abejide pleaded with the Comptroller General of Customs to give Nigerians who may have erred by buying vehicles through smuggling three months to pay their duties and regularise their papers or risk going to jail.

He said the essence of the interface with Customs officials was to facilitate trade and the ease of doing business in Nigeria and asked the Ministry of Finance to provide scanners for automation of Customs services.

Contributing, another member of the House Committee, Honourable Ibrahim Mohammed, stressed the need for decongestion of Nigerian ports, which according to him, can be facilitated through limiting the number of stops to three instead of six.

He said though the Customs Service has done a lot in revenue generation, there is a dire need for officials to do more to ease the suffering of importers.

Earlier, Assistant Comptroller General, Trade and Tariff, ACG Aliyu Seidu, accused Ministries, Departments and Agencies of Government of aiding smuggling of vehicles and asked the lawmakers to assist them fight the menace, which he said is militating against their efforts.

He warned that presently, the Customs law says, such smuggled cars will be seized and their owners jailed, and emphasized that though the Customs Service has embarked on e-project that will enable Nigerians clear their goods from any part of the country, it however, does not mean leaving the system unchecked.