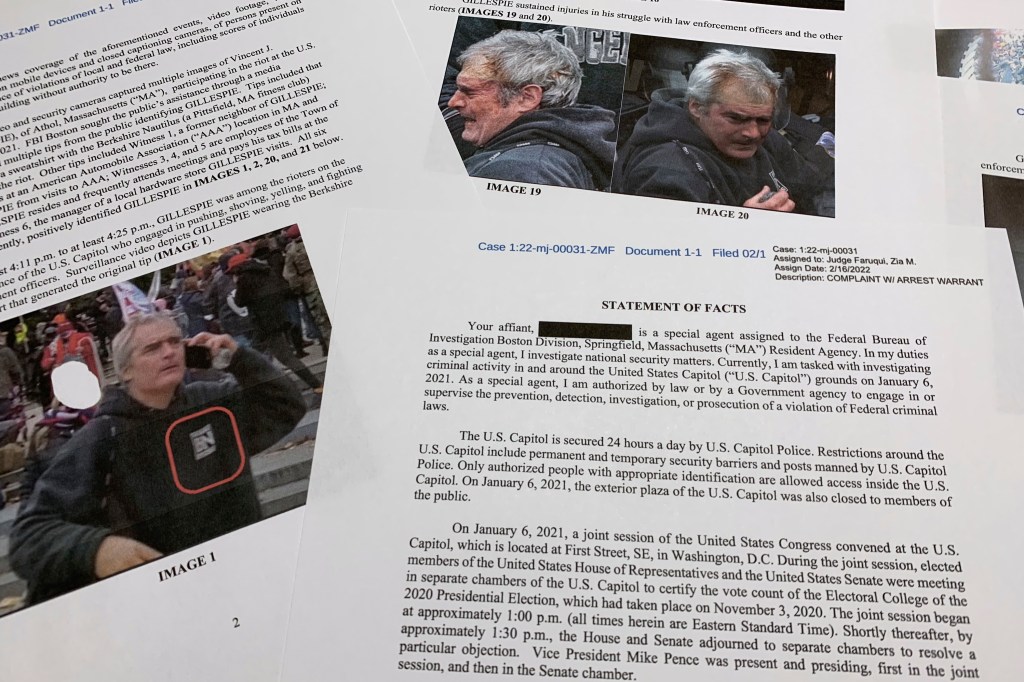 Friday, the son of a prominent American painter was convicted of four counts of participation in the assault on the U.S. Capitol on January 6, 2021.

Prosecutors stated that Vincent Gillespie, 61, of Athol, Massachusetts, was convicted of assaulting, resisting, or obstructing officials; civil disorder; engaging in physical violence in a restricted facility or grounds; and committing an act of physical violence in the Capitol grounds or buildings.

The sentencing date is March 17.

According to investigators, Gillespie pushed, screamed at, and struggled with police, advancing to a line of officers protecting the exterior entrance of Lower West Terrace. At one point, Gillespie allegedly seized control of a police shield and used it to attack policemen.

According to the U.S. Department of Justice, he seized a Metropolitan Police Department sergeant by the arm and dragged him toward the throng while screaming “traitor” and “treason.”

Gillespie’s attorney did not immediately respond to a request for comment.

During the trial, prosecutors utilized a video interview Gillespie had with The Associated Press during the disturbance, as well as security video from the Capitol and police body cameras.

Gillespie paused before stating his place of origin when asked by the AP reporter on the site who was conducting the interview. He hesitated before stating, “I’m in Massachusetts”: “They’ll come for me, guy.”

Vincent Gillespie is the son of renowned American postwar artist Gregory Gillespie, whose self-portraits, fantasy landscapes, and geometric abstractions can be found in the collections of the Metropolitan Museum of Art, the Whitney Museum of American Art, the Museum of Fine Arts, Boston, and other museums. Gregory Gillespie died in 2000.

The AP video recorded a flushed Vincent Gillespie mingling outside the Capitol and speaking aggressively about his role in the attack, lamenting that more like-minded people did not join the fight.

“We were almost overpowering them,” Gillespie told an AP journalist, with blood showing on his scalp from the struggle. I believe we could have won if there had been another 15 to 20 men pushing us forward.

The trial commenced on Monday, with jury deliberations commencing on Thursday and completing on Friday. At trial. Gillespie testified in his defense.

“He testified that he enjoyed the events of January 6,” said Niki Christoff, a 44-year-old jury forewoman from Washington, D.C. “By testifying in his own defense, I believe he was attempting to muddy the waters, which simply prolonged jury deliberations.”

Christoff regarded the photographic and video evidence against Gillespie as overwhelming.

AP witnessed Gillespie splashing water into his eyes outside the Capitol, presumably to mitigate the effects of chemical spray.

He stated that he was among those attempting to storm the building via an aperture.

“I was with a group of other men. Then we began to push against them, and they responded by hitting us and spraying pepper spray in our eyes. However, there were several people crowding behind us,” Gillespie told the Associated Press.

“What you guys need to know, and nobody will listen to this, is that we were extremely (expletive) close.” If more people had been behind him, he continued, “then we would have simply burst through the second set of doors.”

He stated on the video that he hoped people storming the building would “flood in” so that they would be helpless.

“I would hope that they would do so. Take it over. Take it over. Hold it for several days. “I’m not an anarchist, but you can’t let what happened in this election to stand,” he stated, alluding to former President Donald Trump’s baseless assertions that the election was stolen.

Investigators stated that they were informed of Gillespie’s identity by a former neighbor and others, including employees of the town of Athol, where Gillespie attends meetings and pays his taxes. Six witnesses independently identified him from photographs taken during the disturbance, according to the authorities.

Gillespie is one of almost 900 people detained in nearly all 50 states in connection with the assault on the Capitol in which a pro-Trump crowd attempted to prevent the certification of Joe Biden’s 2020 election victory, according to officials.