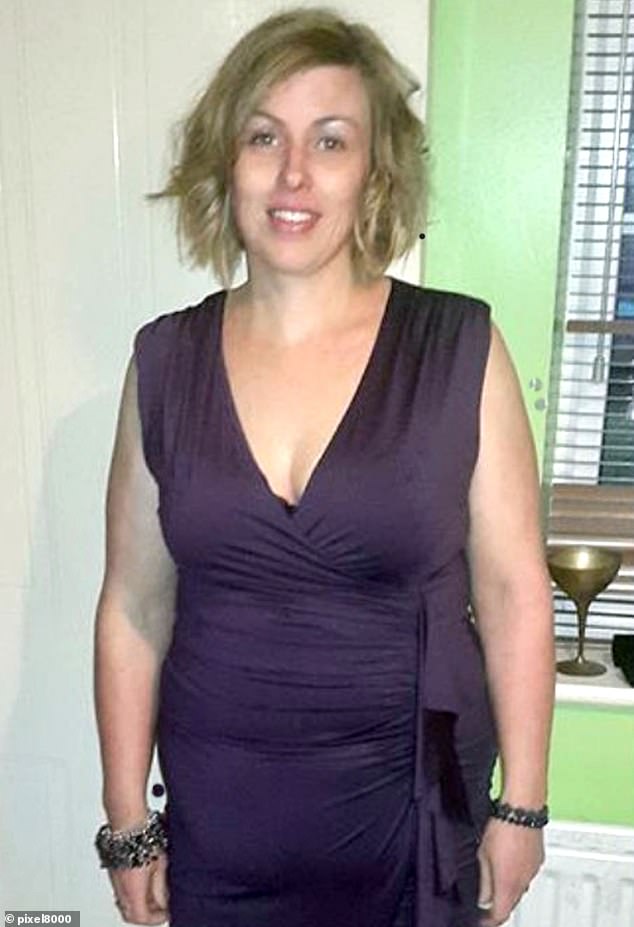 She was “religious” about making sure everything she ate was safe, according to the family of a lady with a severe dairy allergy who passed away after eating a Pret a Manger vegan wrap that had traces of milk.

Mrs. Marsh, a dental nurse from Melksham, Wiltshire, who had a severe dairy allergy and was out shopping with her husband and three kids when she ate the sandwich, passed out on the street.

Ashleigh and Shanaye Grice, two of her kids, came on Good Morning Britain today to discuss the heartbreaking circumstances surrounding their mother’s death.

Speaking to Susanna Reid and Ed Balls, the brothers described how their mother “religiously” checked what was acceptable to eat because she was worried about having a bad response.

It was a huge part of our life, and she was quite stringent about examining everything because it was clearly so terrible that anything like this could ever occur, according to Ashleigh.

As a result, it played a significant role in many aspects of our family’s lives—at home and elsewhere.

“She was just being so fanatical about making sure, double-checking, and triple-checking.”

Like she did that day when she bought the wrap from Pret, Ashleigh continued.

She was really fanatical about that, so she would have double and perhaps even quadruple checked.

The wrap itself had an ingredient list on it, and everything on it, she knew she could eat. At the bottom, it did state dairy-free Planet Coconut yoghurt substitute, so she knew or assumed that it was okay to eat that.

After consuming a marshmallow cereal bar at work, Mrs. Marsh developed an adverse reaction months before she passed away, her daughter Shanaye revealed to the hosts.

She said that the bar, which carried a warning on the label that it could contain traces of dairy, caused her mother to need 15 adrenalin injections but that she had previously consumed it without incident, so she assumed it was safe.

This led Susanna Reid to claim that going out to eat for allergy patients is “like a Russian roulette.”

In order to save other unfortunate deaths, Mrs. Marsh’s family is now urging tighter regulations for food labeling and more “vigorous testing” across the whole supply chain.

There are many things that we wish to alter, Ashleigh continued.

Since testing is the most important factor, we think that the whole supply chain between companies needs to be rigorously tested.

‘It is absolutely imperative that there is full transparency throughout the entire supply chain and that if there is anything even including a risk of contamination, that information is passed on down the food chain,’ said attorney Michelle Victor, who represented the family of Natasha Ednan-Laperouse, who passed away in 2016 after suffering an allergic reaction to a Pret sandwich.

What is known is that Planet Coconut had knowledge that the HG One and the yoghurt that was finally produced were tainted with milk.

They claim that if the Pret Manager had been informed, they would not have used that yoghurt and Celia could still be alive today.

A coroner’s inquest into the death of the mother-of-five heard earlier this month that Pret a Manger did not do its own checks on the suppliers of dairy-free goods for its vegan options.

According to testimony given before the Avon Coroner’s Court, the wrap included yogurt inside that was claimed to be vegan but was discovered to have small amounts of dairy protein.

The yoghurt was created by Planet Coconut, the yoghurt firm CoYo’s Australian-based Australian counterpart’s UK maker and distributor of goods.

Pret a Manger does not seem to have done its own audit of the claims made by Planet Coconut, according to Kirsty Langford, a trade standards officer for Bath and North East Somerset Council, who spoke during the inquest.

When a product makes the claim that it is “dairy-free,” she added, “you expect some form of testing to be going place.”

Since we haven’t been given any proof of that, Ms. Langford added, “When we went back to Planet Coconut, we weren’t furnished with any test certificate and we weren’t sure if Pret had been supplied with any either.”

“That becomes more crucial when the product makes a dairy-free claim; at that point, you would anticipate final product testing to ensure the veracity of the “free-from” claim.”

According to Ms. Langford, a retailer would typically examine the risk associated with a product’s free-from claim by looking into all the supply chain’s methods and components.

She said that Planet Coconut had stated that it tested its product for allergies annually and noted that the frequency of testing for products was not mandated by law.

Nothing in the law mandates how often you must test; for instance, it does not mandate that you test each batch. stated Ms. Langford.

It would happen less often with a small provider like Planet Coconut than with a larger (business).

Although Pret conducted supplier audits, she said, “I would expect Pret to ensure that testing was being completed via their supplier. I don’t believe the audit caught up on the testing of the product.”

According to an examination into Planet Coconut, the yoghurt’s main constituents were coconut cream and ‘HG1’ starch, which was provided by sugar tycoon Tate & Lyle.

The starch was recognized as a potential point of contamination.

Tate & Lyle has never indicated that the HG1 starch was appropriate for a dairy-free claim, according to Ms. Langford.

“Manufactured at a facility that handles milk, eggs, gluten-containing cereals, sulphur dioxide, and sulphites,” read the label on a bag of the starch.

According to Ms. Langford, Planet Coconut denied receiving the information that Tate & Lyle said it did about the possibility of contamination in its products.

The court heard testimony stating that the amount of milk present in the flatbread was so minute that only 5% of those with the most severe dairy allergies would be likely to be affected.

Andy Marsh, Mrs. Marsh’s husband, said that his wife had abstained from dairy “religiously” after a near-fatal episode a few months before in which she required 15 doses of adrenaline.

In a written statement, Mr. Marsh said that he thought his wife had had her typical breakfast of overnight oats with fruit and soy milk on December 27.

Taylor, their 7-year-old daughter, announced that she was hungry shortly after 1 o’clock and went to a pasty shop to buy a sausage roll.

Mrs. Marsh accompanied her, but she refrained from purchasing any food because the staff informed them that the pasties were washed in egg and milk.

She decided to buy a super-vegetable rainbow flatbread from Pret A Manger on Stall Street since she thought it was dairy-free. The family then moved in the direction of Gap while Mrs. Marsh munched on her lunch.

Mrs. Marsh informed her husband that she “felt a little strange” when they were at the Gap shop, but she often felt that way after trying something new to eat.

The family quickly glanced upstairs before leaving the store. Mrs. Marsh pulled out her inhaler as they returned along Stall Street because it was chilly outdoors, her husband earlier said in court.

I inquired as to her well-being, and she replied that she was having trouble breathing, according to Mr. Marsh.

Mrs. Marsh used the EpiPen that her husband had instructed her to take when her condition did not get better, and according to him, she did so. Then she instructed him to call an ambulance.

Before Mr. Marsh could see a street name to offer the call handler, they walked for a few more meters. An off-duty doctor responded to Mrs. Marsh’s collapse as her husband was on the phone with emergency services, the inquest heard.

Brendan Turvey, a government employee with first aid training, said at the inquest that he attempted to assist Mrs. Marsh before she passed away.

In a statement, Mr. Turvey said that Mrs. Marsh passed out while he and his friends and family were on their way to the theater.

“I heard a small girl cry and saw a woman laying on the ground in the middle of the roadway,” said Mr. Turvey. The woman on the floor was speaking to the little girl, who was very upset.

It was so upsetting that I told my family to stay back before going over. Celia was beginning to lose consciousness when I got there, and her face was quite blue and swollen.

Her eyes were open, but she was having trouble breathing. She was covered by my jacket and by several other people as well. A first response ambulance car and two additional paramedics soon followed.

He continued by saying that the initial paramedic gave Mrs. Marsh an oxygen mask and asked him to get the defibrillator out of his car. He alternated performing CPR on Mrs. Marsh with the female doctor after she stopped breathing.

After two more paramedics in an ambulance arrived, the doctor who wasn’t on duty and Mrs. Marsh were taken to the hospital.

Mr. Turvey attempted to learn whether Mrs. Marsh had survived afterward, but it wasn’t until October of that year that he learned she had passed away from watching the news.

Following Mrs. Marsh’s passing, Pret was accused of violating food safety regulations; however, the case was ultimately withdrawn for lack of proof.

The disclaimer that all Pret sandwiches are produced on-site in a busy kitchen and that the firm cannot guarantee that they are acceptable for those with allergies is placed next to each sandwich.

The inquest also heard that food safety inspectors discovered no evidence of cross contamination in the kitchen of Pret’s Bath outlet.

The Marsh family continues to have our sincere sympathies for their terrible loss, and we are doing everything we can to support this inquest, according to a Pret spokesperson who earlier made the following statement.

‘Following the death of Celia Marsh in 2017, Pret was charged. Due to a lack of evidence, the case was abandoned, and Pret was declared Not Guilty.

Through the Pret Allergy Plan, Pret has developed a method to assisting clients with allergies that is industry-leading.

“We will keep doing all we can to make sure that every client gets the knowledge they need to make the best decision for them,” the company said.

It is anticipated that the inquest, which is taking place in Bristol’s Ashton Court Mansion House, will take two to three weeks.

Bath and North East Somerset Council, the Australian coconut yogurt company CoYo, and its UK manufacturer and distributor, Planet Coconut, are among the parties involved.

The incident occurred a year after Natasha Ednan-Laperouse, a person with a sesame allergy, passed away in a related incident after reacting to sesame seeds concealed in a Pret baguette she had purchased at Heathrow Airport but which had not been labeled as containing them.

Because of Natasha’s tragic death at the age of 15, there has been a change in the laws governing food labeling, and sandwiches, cakes, and salads must all have complete ingredient and allergen labels on them.