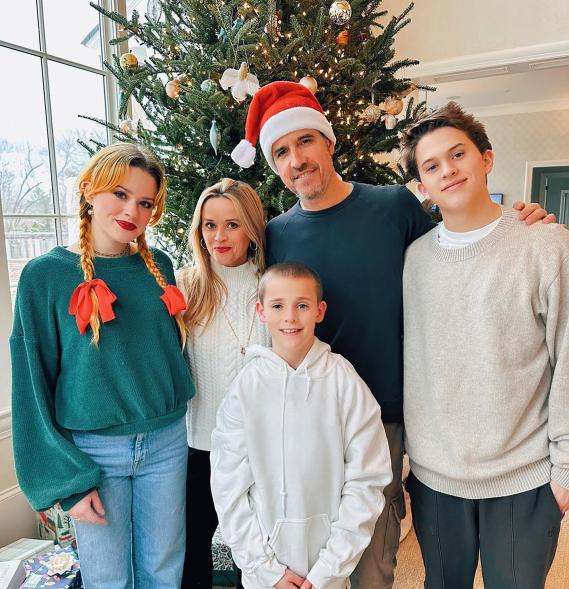 The Witherspoon genes are formidable!

The three children of “Legally Blonde” star Reese Witherspoon — Ava, 23, Deacon, 19, and Tennessee, 10 — are all spitting copies of their mother, according to new holiday photos posted by the actress.

In the photographs, the group posed by the fireplace on Christmas morning before moving to the Christmas tree for a photo with Witherspoon, 46, and her husband Jim Toth.

Witherspoon wore a white cable-knit sweater, while Toth sported a blue crewneck and Santa hat, as the family of five maintained a casual appearance. Tennessee, the couple’s son, stayed warm in a white hoodie and trousers.

The other two of Reese Witherspoon’s children, whom she shares with ex-husband Ryan Phillippe, also donned casual sweaters for the morning celebrations. Ava added some holiday spirit by tying red ribbon around her pigtails and wearing red lipstick.

The 46-year-old actor captioned the photos on Instagram, “Wishing all of YOU a very Merry Christmas and Happy Holidays from our family to yours!”

Although the actress insists she does not “see” the likeness, her 29 million followers could not help but comment on the family members’ striking resemblances.

“Your daughter resembles you more than you do! “Merry Christmas!” said one follower, while another added, “Beautiful family!” I think your oldest son looks just like you.”

“It’s incredible how much your daughter looks like you AND her father!” remarked a third person.

The actress received the same response last year when she uploaded a photo of her family cuddled up on the couch on Christmas Eve.

Witherspoon shares Ava and Deacon with her ex-husband, Ryan Phillippe.

Where I desire to be. With my household. Near a fire. Laughing. Witherspoon captioned the photo at the time, “Enjoying each other’s company.”