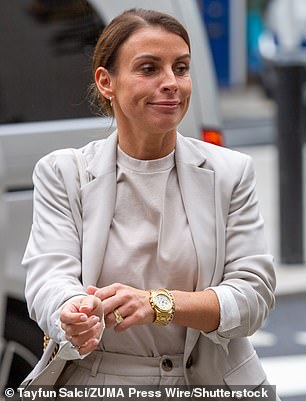 Rebekah Vardy got into a heated argument with Sarah Harding at the 2018 National Television Awards after the Girls Aloud singer spotted her rifling through her handbag, the High Court heard today.

The story – which was published in several tabloid newspapers at the time – was mentioned by Coleen Rooney in written documents she submitted to the High Court as part of the £3million Wagatha Christie libel trial.

Coleen, 36, accused Rebekah, 40, of leaking ‘false stories’ about her private life to the press in a now famous Instagram post from October 2019.

Rebekah denies leaking stories to the media and is suing her fellow footballer’s wife for libel, while Coleen is defending the claim on the basis her post was ‘substantially true’ and in the public interest.

In her written statement, Coleen said that she was ‘aware’ that Rebekah had ‘provided various pieces of ‘behind the scenes’ footage for The Sun’.

Coleen claimed: ‘She also got in a spat with former Girls Aloud group member Sarah Harding during the 2018 event because Sarah apparently caught Becky taking photographs of the contents of Sarah’s handbag when Sarah had dropped it on the floor.

‘Their dispute subsequently appeared in The Sun.’

Rebekah is said to have ‘come to blows’ with Sarah hours after the 2018 NTAs had been broadcast on ITV.

According to an article published at the time in The Mirror, Sarah accused Rebekah of taking ‘sneaky pictures’ of her, sparking a ‘heated’ row between the pair that caused a ‘huge scene’.

Sources claimed that Sarah had dropped her bag inside the bash, and as she proceeded to pick up her belongings from the floor, she saw a camera flash and I’m A Celebrity star Rebekah standing nearby with her phone in her hand.

It is said the singer saw red and accused mother-of-five Rebekah of taking sly pictures of her while she was scrambling around collecting her things.

The insiders continued that Rebekah, the wife of footballer Jamie Vardy, was left irked by the accusation and insisted that hadn’t been the case, offering to show Sarah her phone, before demanding an apology from the Celebrity Big Brother star.

‘Rebekah couldn’t believe the insinuation and angrily insisted she hadn’t even been using her phone,’ they claimed.

‘A few of their friends had to step in and intervene because they were getting really heated with one another- it caused a huge scene.’

Sarah died on September 5 last year after being diagnosed with advanced breast cancer.