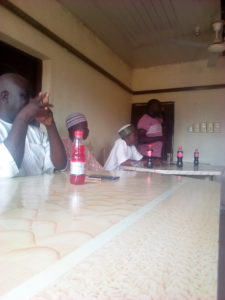 The chairman Radio, Television, Theatre and Arts Workers Union, RATTAWU Adamawa state chapter, Comrade Shehu Usman Bolware has appealed to the caretaker Executive members of ABC Yola chapel of the union to work hard for the progress of the chapel.

He gave the charge during a congress meeting organized by the caretaker committee held at ABC Broadcasting House Monday.

Comrade Bolware said the aim of the union is to provide conducive working condition and ensuring understanding among members.

The state chairman pointed out that the caretaker committee will serve before the election of new officials and announced that election of the new leaders will be held soon.

Comrade Bolware advised members of RATAWU to support the caretaker Committee members to enable them deliver on their mandate.

In his comments the General Manager of ABC Yola, Mr Alleni Ethan Dah, represented by the staff officer Alhaji Musa Shelleng called on members of the union to set aside their differences and channel their grievances through appropriate channels.

Speaking, the acting chairperson of ABC Yola chapel, of RATTAWU Comrade Maryam Ahmadi said the essence of the congress meeting was to introduce the caretaker members and discuss issues on how to move the union forward.

She solicited support of members of RATTAWU in ABC Yola to enable her team attain set objectives.