Skip to content
Home » News » All News » Rail strikes will occur ‘very soon,’ according to unions, and might result in power outages in UK 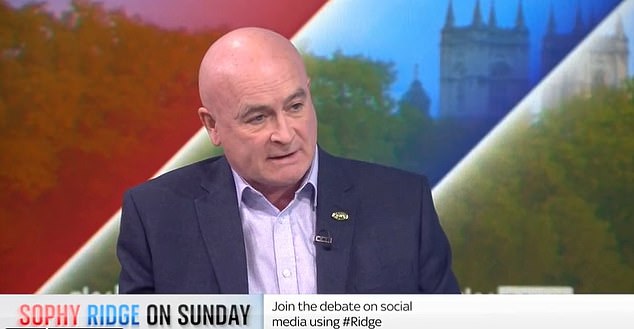 Rail strikes will happen ‘very soon’ and could last long enough to cause blackouts unless the government bows to demands for huge pay rises.

The head of the RMT union stepped up threats of a wave of disruption warning he ‘cannot see a way out’ of the standoff with ministers.

Mick Lynch refused to rule out the so-called ‘summer of discontent’ hitting power supplies, and said they could ‘go on for a very, very long time’ unless there are wage increases to match soaring inflation.

They will have to give a fortnight’s notice of strikes, meaning they could start in mid-June.

Ministers have been warned that freight trains supplying critical power plants could be severely disrupted. There are also fears over about fuel supply lines to garage forecourts.

Asked whether a strike is inevitable, Mr Lynch told Sky News’s Sophy Ridge On Sunday programme: ‘I can’t see a way out from the strikes at the moment unless there is a breakthrough and the Government instructs these companies – which they are doing to change their line rather than harden their line – it is very, very likely there will be strike action and it will be very soon.’

On the duration of any industrial action, he said: ‘They could go on for a very, very long time. There is no sign at the moment of that anybody is backing down on their side of the table.’

Mr Lynch declined to spell out the level of disruption union that could be caused, but pointedly refused to rule out hitting power supplies.

‘We will decide that if it happens. We want to make the strike action as effective as possible from our point of view,’ he said.

‘Our members are prepared to take effective strike action in pursuit of the settlement of this dispute. I have got no idea how long that will take and I can’t determine from here what the outcomes and side effects of that will be.’

Mr Lynch suggested workers will only settle for pay increases matching inflation – which is expected to top 10 per cent on the CPI measure in the coming months and is already running at 11.1 per cent on the unions’ favoured RPI metric.

He also took aim at Keir Starmer, suggesting he does not seem to be on the side of workers.

Mr Lynch – whose RMT is not affiliated to Labour – said unions were asking ‘what is the point of this connection if we get this bland democratic party sitting in the centre of politics’.