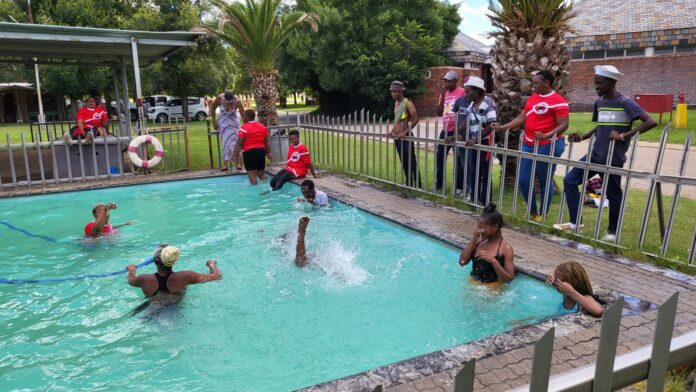 The nation is in an uproar over a horrifying incident involving suspected racism against young black boys, who were pushed, choked, and pushed around by elderly white males.

The alleged racist incident occurred at the Melspoort Resort and Conference Centre in Free State, roughly 20 kilometers outside of Bloemfontein.

In the widely shared Twitter video, young black boys can be seen being assaulted, pushed, and choked by older white men near a swimming pool.

The video also depicts white guys yanking the young black boys by their hair and apparently attempting to drown them in the pool.

The video was shared by CUT FM radio presenter Tumi Frost, who revealed that she and her family were visiting the resort on Christmas Day to have a good time until the unpleasant images ruined the trip.

“The family spent the day at the resort and conference center in Maselspoort, Free State. My brothers were assaulted by these grown males since the pool is reportedly reserved for “white people” only. The Netherlands, which we adore,” Frost remarked on Twitter.

Brian Nakedi, the parent of the boys who were allegedly subjected to racial abuse, stated, “We came to Melspoort resort for a family reunion with our relatives from Pretoria, Soweto, and Bloemfontein. When the incident occurred, our children informed us that white people were preventing them from swimming because they were not permitted to swim in the swimming pool, which was allocated for whites exclusively. We attempted to comprehend their motives, and the situation was defused; however, the children were later prohibited from entering, and white men’s resistance caused the situation to spin out of control. These elderly folks attacked and attempted to drown our children.

This situation occurred at the same location two years ago, and we were able to handle it. They are accustomed to this display of racism against black people. My children are adolescents and scarred. The owners phoned the police, and after viewing the footage, the police were going to open a case of attempted murder, but instead they opened a case of common assault. We are dissatisfied with the way this situation is being handled, and we want the police to open a case of attempted murder.”

A man described as Nicholas, one of the resort’s managers, did not respond to our calls.

On Monday, EFF members demonstrated at the resort while swimming and screaming, “Racism must fall!”

The assault charge was filed at the Glen Police Station in Bloemfontein. However, the boys’ family is certain that a case of attempted murder must be opened.

On her Twitter profile, SABC news international editor Sophie Mokoena also stated, “I live in Free State. Currently, I am residing in Frankfort, Free State. This is the situation in this province. Not yet Uhuru.”

Makalo Mohalo, the MEC of the Department of Economic, Small Business Development, Tourism, and Environmental Affairs (DESTEA), took it upon himself to contact the owners of the Maselspoort resort due to the negative impact the claimed racism had on the province.

Mohale will meet with the resort owners to have a deeper understanding of what transpired.

Premier of the Free State Sisi Ntombela highlighted with disdain the video spreading on social media of white men attacking children on Christmas Day at the Masselspoort resort.

“I’ve asked DESTEA MEC Makalo Mohale to handle the situation with the urgency it requires and to involve law enforcement agencies. Ntombela stated that racism and such cruel acts have no place in our province.

Additionally, MEC Mohale will visit with the victims.

As soon as the engagements are finished, the Province will issue a statement regarding the next steps.

Mojalefa Mphapang, the spokesman for MEC Mohale, stated, “After the event became viral on social media, the Free State MEC for DESTEA, Mr. Makalo Mohale, would meet with the management of Masselspoort [resort] to gather all the facts and contact the victims. He will continue to follow up with SAPS management to ensure that the victim’s concerns are addressed. MEC Mohale condemns these foolish acts of racism at all costs, and he adds that this undesirable conduct should never be tolerated in any form, but should be dealt with as an emergency.

MEC Mohale stated, “The incident has been regarded as a threat to the revitalization of the tourism industry.” Therefore, we ask our communities to report any racist incidents to law enforcement agencies and to continue to support the police in bringing culprits to justice.”

Mapheule Coach Liphoko, provincial chairwoman of the EFF, stated, “We denounce racism in the strongest terms possible.” When we arrived here after viewing the movie, we immediately went to the pool and began swimming. We cannot allow racism to sprout its ugly head under our supervision as EFF. In Free State, there can never be a no-go zone, and everyone should appreciate and use their right to go wherever they want, whenever they want. We cannot permit racists to establish a mini-Orania in our province.”