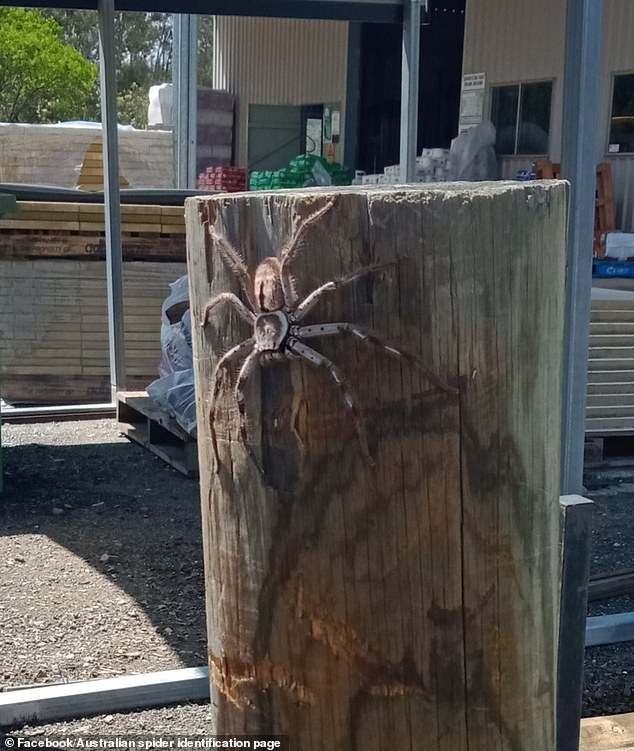 In Australia, arachnophobes will face their worst fear this summer, as experts predict an onslaught of large, hairy huntsman spiders.

Southeast Queenslanders have been cautioned to be on the watch for larger-than-usual spiders, whose growth has been aided by the warmer temperatures and constant rainfall.

The hot and damp weather has also increased the amount of prey available to hunters.

Dr. Jeremy Wilson, an arachnologist, told the Courier Mail that the presence of a large number of adult huntsman spiders indicates a successful breeding season and that the weather over the past two years has been ideal for breeding and prey availability.

“Because there has been more prey around, those huntsmen will be considerably larger than usual,” as a result of these years of ideal conditions.

Despite their intimidating appearance, huntsman spiders are not regarded to be hazardous.

The bad news is that they can still bite, but their venom is very harmless to humans.

As with other spiders, (huntsman spiders) carry venom, and a bite can have negative consequences, according to the Australian Museum.

However, they are averse to biting and would typically attempt to flee rather than be aggressive.

In addition to mosquitoes, flies, and sometimes much larger species such as lizards, huntsmans devour other, more vexing insects and insects that inhabit residential areas.

Their victim is not caught in a web, but rather followed and pursued with stealth and swiftness.

Large and powerful, the teeth of a huntsman grip its victim until their poison immobilizes it.

The lesson from the experts is not to fear spiders because they pose no threat.

Using a scrap of cardboard and a container, it is rather simple to capture one if you discover it inside your home and wish to release it outside.

However, if you find a huntsman inside your home a few hours later, it may or may not be the same animal you relocated outside.

Concerningly, the population of funnel-web spiders is also expected to increase during the summer.

Funnel-web spiders are considered the most dangerous in the world, and their venom is very toxic.

At least thirteen Australians have died from funnel-web spider bites, however since the introduction of an anti-venom in 1981, no deaths have occurred.

According to the Australian Reptile Park, ‘ideal’ wet weather and humid weather conditions at the beginning of their mating season will result in a dramatic increase in their population.

On the east coast of Australia, funnel-webs are typically found in dense vegetation or beneath rocks and logs.

However, they are occasionally discovered in gardens, garages, and even shoes.

Huntsman spiders are big, long-legged spiders. They are typically grey to brown with banded legs.

Common habitats include loose bark on trees, cavities in rock walls and logs, under rocks and bark slabs on the ground, and on vegetation.

Numerous huntsman spiders have very flattened bodies that are suitable for surviving in tight areas beneath loose bark or rock cracks.

This is facilitated by their legs, which instead of bending vertically in proportion to the body, have twisted joints that allow them to spread out crab-like forwards and laterally.

In addition, they are infamous for infiltrating vehicles and hiding behind sun visors or running over dashboards.

»Queensland residents warned of an influx of “larger” Huntsman spiders«