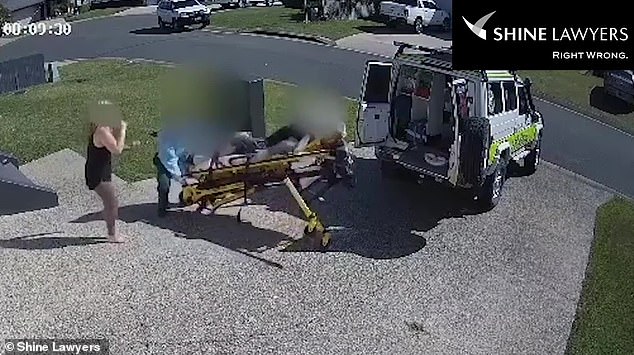 A painter who was severely hurt when the gurney he was strapped to toppled over and threw him to the ground has filed a lawsuit against the paramedics.

Clinton McLachlan was being transported to the hospital in Mackay, Queensland with severe Covid-19 symptoms when a paramedic lost control on a steep drive.

A video of the incident shows a paramedic from the Queensland Ambulance Service prepared to slip Mr. McLachlan into the rear of his truck.

But he manages to flip the gurney, sending Mr. McLachlan crashing into the driveway’s pavement.

Mr. McLachlan, 44, had a severe shoulder injury and will be out of work for several months.

The startled paramedic is depicted running to assist the unconscious patient, as a woman standing on the stairwell above rushes down.

Christine Smith of Shine Lawyers Mackay stated, “Our client ran a thriving business with his brother and truly enjoyed his work.”

As a result of this tragedy, he is no longer able to contribute as much, and his family’s financial security has suffered greatly.

In a statement provided to Daily Mail Australia, Queensland Ambulance Service expressed’regret’ for the occurrence.

Our best wishes and thoughts are with the patient and his or her family. We deeply regret any anguish or harm caused to the patient,’ stated the statement.

It would be inappropriate to remark on this issue while a legal action is pending.

According to the Courier Mail, Mr. McLachlan deemed it “crazy” that a single paramedic attempted to move him by himself on the steep driveway.

Mr. McLachlan stated, “It was a tremendous impact, and my shoulder is rather sore.”

Ms. Smith stated, “Clinton has made it clear he has no ill will towards the paramedic, but this episode demonstrates the need for greater resources and a more severe system of work to prevent it from happening again.”

We hope that by reporting this incidence, suitable safety procedures will be implemented to avoid this from happening to another patient.

Using a single paramedic is not an uncommon practice, according to Daily Mail Australia.