Skip to content
Home » News » News » Queens murder: Lover of women who died after being stabbed 58 times is indicted 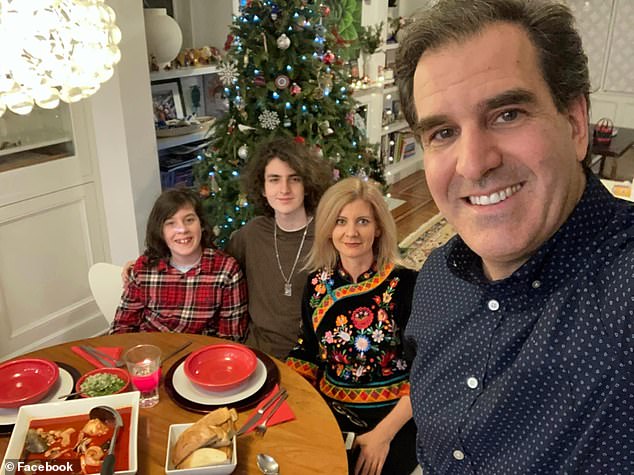 The handyman lover of a married Queens mom appeared in court as he was indicted for her murder, allegedly stabbing the woman 58 times in her basement and stuffing the body in a duffle bag while her son was upstairs.

David Bonola, 44, of Queens, was arraigned on Tuesday on a 13-count indictment for the April 16 murder of Orsolya Gaal, 51.

Prosecutors said Gaal had returned to her home in Forest Hills on April 16, at around 12:30 a.m., when Bonola went into the house just a few minutes later.

Bonola, who had worked as Gaal’s handyman for the last two years and had an affair with the mother of two, got into an argument with her and went on to slash her throat while they were in the basement, according to the charges.

NYPD officials said Bonola had gone over to the home in an attempt to resurrect the affair as the relationship had come to ‘the end’.

Prosecutors said he went on to stab her 58 times before grabbing one of her son’s hockey duffle bags and stuffing her body inside. Gaal’s 13-year-old son, Leo, was asleep upstairs when the murder allegedly took place.

Her husband, Howard Klein, and oldest son, Jamie, were out of town looking at colleges.

Video outside the home shows Bonola rolling the bag through the quiet neighborhood before police discovered it near Forest Park at around 8 a.m.

Prosecutors said police were able to trail the blood from the duffle bag to Gaal’s home, where the found the knife hidden in the house as well as Bonola’s jacket.

After he was arrested and questioned, Bonola allegedly admitted to police that he stabbed Gaal and moved her body, according to court records.

He also admitted to going to the hospital for a deep cuts he suffered on his hands.

In a statement following the indictment, Queens District Attorney Melinda Katz said: ‘This heinous murder left two teenagers without a mother and terrified an entire community.

‘As alleged, this defendant brutally stabbed the victim over 50 times before stuffing her body into a duffel bag – which he then dragged for several blocks in an attempt to dispose of the victim’s remains.

‘The defendant has now been indicted and arraigned on very serious charges and faces a lengthy prison sentence if convicted.’

The criminal complaint charging Bonola cites both surveillance video footage and his own ‘statements and admissions’ as evidence in the case against him.

Bonola, who hails from Mexico and had moved to the U.S. more than 20 years ago, was arrested on Thursday.

Police sources who spoke with the New York Post say he spilled his guts in an entirely ‘matter of fact’ manner – and then proceeded to eat a bagel with cream cheese as if nothing had happened.

‘It was very matter of fact, very thorough, he answered every question they had,’ a police source told the newspaper. At no point did he request a lawyer.

Then, as he was put in a police car on Thursday in front of journalists asking why he killed her, he screamed: ‘F**k you motherf****r!’

Bonola and the victim first started seeing each other in 2020 after he worked in the family home where Gaal lived with her 53-year-old husband and two sons. It was an on-off relationship which they rekindled in April, but which had recently ended again.

According to NYPD sources, Bonola had gone over to the home in an attempt to resurrect the affair after it had come to ‘the end’.

‘A heated argument ensues between the two in the basement. A knife is brandished. A violent struggle ensues, resulting in our victim being stabbed ruthlessly and brutally in excess of 55 times, causing her demise,’ NYPD Chief of Detectives James Essig explained.

He then retrieved her son’s hockey bag and waited until 4am, then wheeled her body out of the home and dumped it less than half a mile away. He also sent a text to Klein, Gaal’s husband, claiming to have been someone she once sent to jail in a failed attempt to throw police off his scent.

hose living and working near Bonola’s 114th Street home described him as being something of a ‘night owl’.

He was often seen riding his bike and playing music, sometimes carrying a guitar. the man as being a ‘night owl.’

Bonola had been married once before and had two sons of his own with a woman who had later died. A local said that Bonola had also served in the Mexican army.

A local florist, Martin Calixto, said that Bonola would often stop by and buy a single red rose each and every time. He even recognized Gaal from photos that Bonola had showed him in the past.